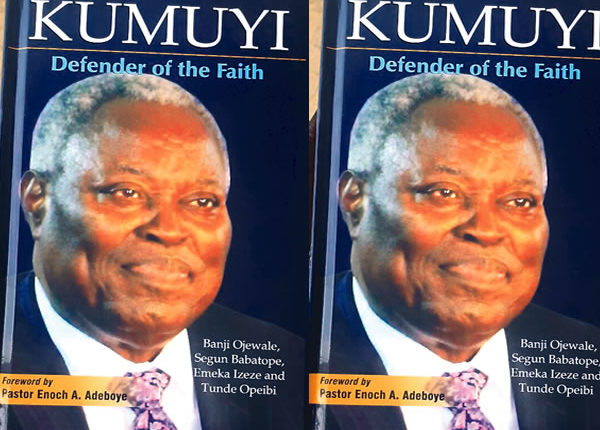 Doing a biography on a spiritual celebrity such as Pastor William Folorunso Kumuyi, the General Superintendent of the Deeper Life Bible Church, could be arduous, for so many reasons. For instance, there are huge assumptions that there is little or nothing  else to discuss about such popular spiritual figure; since almost everything about him has already been exhausted in the public space. This seemingly awkward position is further reinforced by the argument in some quarters that the nature of his calling also gives his huge audience base the opportunity to lap up every information about him, through his teachings and  writings, so there is nothing new to be said about this great teacher and preacher of the Bible.

But,  the recently-published  biography, Kumuyi: Defender of the Faith,  seems to be out  to put paid to such assumptions, and many more.

Authored by four seasoned professionals,  Banji Oyewole, Segun Babatope, Emeka Izeze and Tunde Opeibi,  and divided into 14 chapters,  the biography, published by Elite Publishing Academy, United Kingdom, represents  an attempt by the quartet at unraveling the spiritual mystery called Kumuyi, and providing the never-been-told tales of one of the greatest defenders of the Christian faith in the present-day Nigeria.

With a foreword written by another accomplished man of God,  the General Overseer of the Redeemed Christian Church of God (RCCG), Pastor Enoch Adejare Adeboye, the authors’ intention of getting the readers’ rapt attention from the beginning seems to have been accomplished.

For instance,  Pastor Adeboye’s attestation to the Deeper Life Bible Church’s General Superintendent’s holiness and sanctimonious living assures readers that the piece of literature in their hands is not a compendium of spurious and phony claims aimed at image laundering,  as it is the custom today; but a biography aimed at discussing and celebrating a man whose only vision on earth  seems to centre on depopulating the kingdom of darkness.

Interestingly, the  highly revealing and insightful book never failed to live up  to this assurance.

For instance, as a way of capturing the readers’ attention, the 325-paged biography starts with the teachings,  miraculous healings, and other spiritual exploits  that  have become the signature tunes of the holiness -preaching cleric. Not until in the second chapter  do the readers  have the opportunity of having  the real details of what growing up looked like for Pastor Kumuyi.

But, as the narratives continue, one of those things the reader will find weird, intriguing and amusing,  in the second chapter, is the  unconventional  way the mother, Mrs Comfort Idowu Kumuyi, regarded as one of the strongest women of her days, went about  childbirth.

“She believed only her husband had the right to see her complete body, and so, would dispense with the assistance of a midwife and engage in self-delivery. She would lock her room whenever it was time for her and would only open the door to allow others take care of the baby after a successful arrival of the baby”.

Such faith is quite uncommon in today’s Christendom. But, one question that will continue to tug at the readers’ hearts at this juncture is whether Pastor Kumuyi’s unflinching faith in divine hand is traceable to some of those circumstances surrounding his birth.

Another of the many puzzles thrown up in the book is the revelation that the cleric also had his fair share of truancy while growing up.

Besides being described as a lazy student, the young Kumuyi, who was said to  later have a change of heart while in Class Four at Mayflower, Ikenne, in the present-day Ogun State, was said to also have a ‘playful disposition’, and not even a looming promotional examination  would make him sit up!

That he eventually changed for  the better, secured  direct entry admission into the nation’s premier university, the University of Ibadan, the same year he became born again, 1964, to study Mathematics, and eventually graduated three years later, 1967, with First Class Honours degree, bears eloquent testimony to the fact that God had been interested in the affairs of  Pastor W.F. Kumuyi right from the cradle.

Another important lesson to be learnt here is the fact that it is rather dangerous to write off an individual, especially when God is involved, like in the case of the ‘lazy’ young Kumuyi then.

The reader is also made to wonder at the unusual place the cleric had his spiritual turnaround, the Mayflower, a secondary school founded by an atheist, Dr Tai Solarin.

Surprisingly, rather than work against the young Kumuyi’s spiritual growth,  the school, instead, encouraged him to go further his educational career at the nation’s premier university, the University of Ibadan.

Though  other literatures had talked about how Deeper Life Bible Church was formed, the new biography provides a fresh insight and perspective.

For instance, the young Kumuyi had already made up his mind to advance his education career by going to the University of Lagos for a postgraduate certificate, and being a full-time priest was never in his mind. But the persecution, rejection and outright derision of his holiness preaching, and those  that stood with him,  informed his decision for a career change. The persecution was said to be so rife that those found to be toeing his spiritual path, then, especially the younger ones, were denied the rights of marriage by most of the existing churches.

It is, however, interesting to see how a modest Bible study group, started in 1973, in his official university residence, Flat  7,  with 15 people, was to later blossom into a full-blown church in 1982; a confirmation of the biblical admonition of not despising the days of little beginnings.

One thing that actually stands the cleric out is his readiness to admit past mistakes, no matter the age and gravity of such errors, and make restitutions, in sync with his expository teaching of God’s words.

To the surprise of many, in his attempt at demonstrating that restitution goes beyond confessing  wrong doings to those affected, but the readiness to bear the consequence of such wrongdoing, the reader is regaled in Chapter 7, titled, Passion For All, with how Kumuyi, as a relatively young convert then, had written to the West African Examinations Council (WAEC), confessing his sins, and asking for forgiveness. And instead of being prosecuted, as he had feared, he received a letter of appreciation from the organization charging him to continue in the righteous path he had chosen.

Interestingly one of the strong points of the book is its characterization method. The  testimonials provided by individuals, consisting of  his aides, members of the church and the general public, in Chapters 12 and 13, titled: Perspectives and Personal Stories Parts One and Two,  give  readers the opportunity to know the inner workings of the cleric.

One of the most revealing parts of the book is Chapter 10, which gives readers an idea of where the name ‘Kumuyi’, and the biography’s title are derived from. While ‘Kumuyi’ is said to be an abbreviated form of his father’s middle name ‘Ikumuyiwa’, the book’s title is derived from his first name, William, which the cleric himself had once explained ‘foreshadows  God’s plan  that he would be a ‘defender of the faith’.

The concluding chapter of the book must be soothing  to many  that still want the 80 year-old cleric on the scene for some time to come. Readers are assured that the holiness-preaching priest is not in a hurry to dump the altar yet. “William Folorunso Kumuyi, though getting older, is still waxing stronger, fervent in spirit.. He  will not retire from preaching..”

Except for a few errors, such as the ones on page 66, where the authors meant to use the word ‘one’ instead of ‘was’ in the sentence ‘That was singular, divinely-inspired decision was the precursor to the establishment…”, the book succinctly captures the life of the man, described as ‘preaching and teaching the bible as if he was there when the book was written’.

One of the book’s strong points is its accessibility of language, which will go a long way in boosting its readership base, and put it in the hands of many that want to know more about this spiritual mystery.