A review of Oba (Dr) Adedapo Adewale Tejuoso’s book, Mr 30 Years of Stewardship on the Throne of My Fore-Fathers (Volumes 2 and 3) 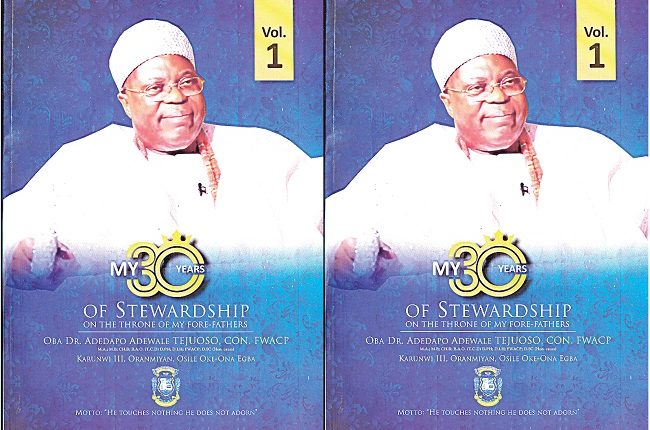 THE second and third volumes of Oba (Dr) Adedapo Adewale Tejuoso’s book, My 30 Years of Stewardship on the Throne of My Fore-Fathers focuses on the traditional ruler’s efforts at nation-building.

Oba Tejuoso specifically mentions his roles at the 2014 national confab in Abuja, and his efforts alongside other delegates to securing the release of the presumed winner of the June 12, 1993 presidential election.

In an interview granted to the Nigerian Tribune on May 28, 2011, Oba Tejuoso discusses how God used him to save Nigeria. He says he obeyed God by going for the conference and his exploits there went a long way in saving the country from destruction.

Part of the objectives at the conference, according to Oba Tejuoso, is to decentralise political power to the six geo-political zones.

According to the traditional ruler, one of the proposals at the confab is the need to have one president and two vice presidents with five-year one term tenure.

He also says: “We wanted to empower the six geopolitical zones and weaken the federal (central) government in order to discourage corruption and make politics unattractive to people who have the love of money at heart.”

In another interview in the Nigerian Tribune on June 12, 2011, Oba Tejuoso further highlights his exploits at the confab.

In fact, in an interview in the Daily Sun of June 23, 2011, Oba Tejuoso, explains why General Sani Abacha refused to release MKO Abiola before he died in detention.

He also highlights how former President Olusegun Obasanjo, just a day or two before the confab, had gathered some traditional rulers to visit Abacha on how to talk to the head of state on the need to release Abiola.

“We all went to see Abacha who, having listened to all our pleas, said he wanted to listen to the personal views of each of us traditional rulers one after the other.

“It was the following day that I delivered my speech at the conference. I, therefore, understandably spoke vehemently against the set-up, and they were infuriated.

“When I came up to speak for the second time, that day at the conference, they already started seeing us, the Yoruba delegates, as the real first team of the Yoruba and not the second team that they hitherto thought we were.”

He also explains that Southern delegates wanted the presidency zoned to the geopolitical zones of the country and rotated among them, but Northerners neither wanted zoning nor rotation.

He then focuses on the Grand Commander of the Federal Republic (GCFR) honour for the late MKO Abiola by the Muhammadu Buhari administration, which he believes recognises MKO as a former president of the country.

After focusing on his love of Christ in the first volume of the book, Oba Tejuoso, in an interview in the Daily Sun on June 22, 2011, explains how he renounced membership of Lodge societies.

Another important thing in the life of the traditional ruler was the murder of his mother, but in an interview in The Punch on October 1, 2011, he says he has forgiven her killers but would never forget.

The remaining two volumes focus mainly on his interviews, as well as newspaper reports of national issues.

Through the publications, Oba Tejuoso has been able to highlight his contribution to the political survival of Nigeria.

Lekki Shootings and the Resurrection of the Massacred