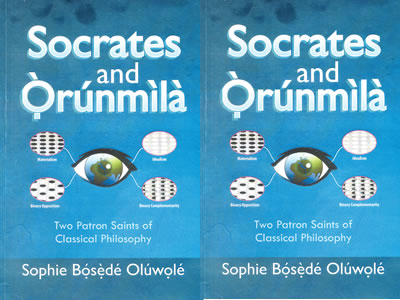 P ROFESSOR Sophie Bosede Oluwole’s book centres on two saints of classical philosophy, Socrates and Orunmila. To study the works of these two great philosophers, the retired professor of African Philosophy delves into Comparative Philosophy, which is a relatively new field of study, research and achievement in understanding and teaching.

Quoting from Bahm (1977), Professor Oluwole explains that this study’s distinction, which on the surface appears paradoxical, is between comparisons of ideas, concepts, principles and theories in philosophy and comparison as the study of the works of two or more thinkers or system, at different or similar times and places.

Bahm identifies some areas in which scholars and researchers have carried out comparative philosophy in recent times. An expansion of his list includes the comparison of philosophies of:  Two thinkers each of whom lived and wrote at the same age in the same society, e.g Plato and Aristotle; two thinkers who lived and wrote during two distinctive stages of the history of thought of a multi-lingua intellectual culture, e.g St. Augustine and Immanuel Kant; two thinkers from two distinctive cultures, e.g Socrates and Buddha, among others.

Now, Professor Oluwole has come up with comparisons between Socrates and Orunmila, identifying the ideas of each of these thinkers as philosophy from those that distinguish the tradition of philosophy within which each finds rational existence.

In comparing these two philosophers, Oluwole says that by an irony of history, Socrates and Orunmila are two of the few ancient thinkers who many scholars agree stand before us in flesh and blood. By an irony of fate, they are two of the greatest thinkers of the world who did not write down anything. However, one incontestable fact is that both Socrates and Orunmila discussed their ideas, beliefs, views and taught in oral language. The verbal forms and literary styles in which they did these share some distinctive literary similarities.

The author highlights that William Durant, a notable researcher and philosopher, points to the fact that the language of Socrates, as recorded by Plato, contains poems, metaphors, parables, stories and myths, while Professor William Bascom, Wande Abimbola as well as Dr Abosede  Emanuel have each separately noted that the basic forms of expression in the extant literature that contains the views of Orunmila are poetry, prose, chant, litany and song. Scholars of Yoruba culture conventionally treat this oral tradition as a compendium of aphorisms, tales, proverbs and mythologies.

Professor Oluwole notes that the idea for the book first came in a research paper presented at an international conference organised by the Philosophical Association of the Republic of Benin, in collaboration with the International Colloquium on Euro-African Personalism, which was held in 2007, with an enlarged version presented in Palermo, Sicily, Italy in 2008.

A summary of major points raised in that research paper says: “A comparison of Socrates and Orunmila must definitely sound strange to the ears of most contemporary Western trained scholars. This is so given the fact that Socrates is well-known as the ‘Father of Philosophy,’ whereas only a handful of theologians and anthropologists are familiar with Orunmila as Yoruba god of wisdom.”

This, according to Professor Oluwole, is the reason scholars conversant with the ongoing debate about the existence of African philosophy are outraged at an apparent attempt to elevate an African mythological figure to the status of the doyen of ancient Greek philosophy, and the leading ancient Western philosopher.

In the second and third chapters of the book, the author delves into the lives of Socrates and Orunmila, revealing those things made public by Aristophanes, Socrates right hand man, and the 16 disciples of Orunmila, who the 16 Odu Ifas are named after.

Professor Oluwole also exposes the parallels in the lives and times of Socrates and Orunmila, highlighting that while Socrates was born in Athens, Greece, around 468 BC, Orunmila was said to have been born in Ado, but some claim Ile-Ife, around 500BC. In fact, in one of the Odu Ifas, Orunmila denied that he was not a native of Ado, but only went there to convert the people into Ifa.

Socrates’ father, Sophonisus, was a stone mason, while Orunmila’s father, known as Oroko or Jakuta, with the latter literally meaning a stone man.

Socrates was depicted as having protruding eyes, thick lips, big paunch, a large capacity for liquor, bald, dark skinned, short and ugly, wobble while walking, while an Odu Ifa describes Orunmila as a short, black and ugly man given to drinking, and this made him to wobble when walking.  Some said Socrates had 10 disciples, while others said he had more, but Orunmila had 16 disciples who the Odu Ifas are named after.

In the third chapters of the book, the author traces what these two philosophers under study had said on different issues of human endeavours during their lifetimes. Due to the fact that both of them wrote down nothing, researchers have had to rely on what Plato recorded on his master, Socrates, while the 16 Odu-Ifas gave an insight to what Orunmila had said.

On human destiny, Socrates says: “Your destiny will not be allotted to you; but you will choose your genius; and let him that draws the first lot have the first choice, and the life which he chooses shall be his destiny.”

On the same issue, Orunmila, in Otura Meji, says: “Every human being sent by the Omnipotent to the earth must go before Orisa to choose the blessing he desires with this condition that he cannot choose more than one blessing…”

On virtue, Socrates says: “Then virtue is the health and beauty and well-being of the soul, and vice, the disease and weakness and deformity of the same. They themselves care only for making money, and are as indifferent as the pauper to the cultivation of virtue.”

On this same virtue, Orunmila, in Oyeku Meji, says: “Raise it up, pull it down, twist it as you may, the essence does not change. What matters most is iwa (good character/virtue). You may be wealthy, have many children and build several houses; all come to naught if you lack good character.”

Both philosophers discussed on several life issues like the nature of reality, the nature of truth, limit of human knowledge, necessity of education, paying evil with evil, lust for money, among others.

In Obedience to the state, Socrates says: “Our country is more to be valued and higher and holier far than mother or father or any other ancestor… And when we are punished by her, whether by imprisonment or stripes, the punishment is to be endured in silence.”

Speaking also on this, Orunmila says: “The president sends for you, your response is that you are consulting Ifa Oracle. Even if the divine message is positive, what if that of the president is negative?” This chapter also highlights the parallels in the philosophical views of Socrates and Orunmila.

Professor Oluwole’s book, which is recommended for students and scholars of philosophy and history, answers Western philosophers who hold the view that no African philosopher can be at par with Western thinkers.

Olufemi Oluwole: A journalist remembers his contributions to the profession,…

Ayegbayo, Numadzi, Alagbe, eight others to feature in Arts from Motherland exhibition…