Arts and Culture
By Akintayo Abodunrin On Nov 29, 2020 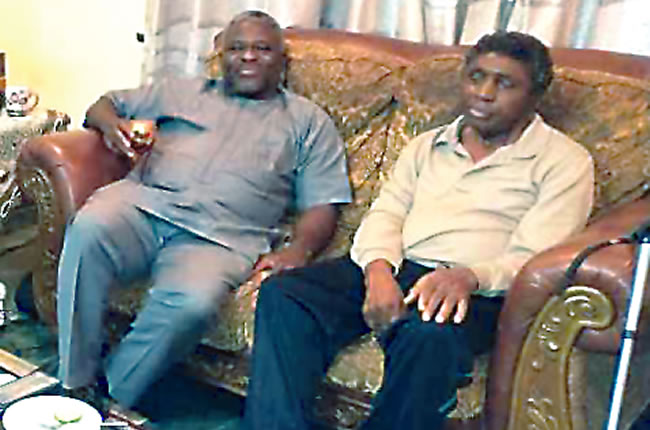 Poet and writer, UZOR MAXIM UZOATU, reports the participation of the veteran musician at an arts event in Anambra State.

THE lionised singer, Bongos Ikwue, was the star attraction at the event tagged ‘A Plethora of Creative Minds: An Evening with Peter Umeadi and Friends at Agukwu Nri’ on Wednesday November 18, 2020.

Professor Peter Umeadi, the former Chief Judge of Anambra State, was an amiable host in his country home in Nri, the cradle of the Igbo nation. The event was coordinated and emceed by the acclaimed king of monodrama, Greg Mbarjiorgu.

The evening kicked off with the inimitable chairman, Chief Loretta Aniagolu, a distinguished attorney and estate developer, rousing the guests with inspired nuggets of knowledge in a blend of English and her Wawa dialect of Igbo language, stressing that art enlivens the human race.

The evening’s offerings had a riveting fountainhead as Prof Krydz Ikwuemesi dwelt on the subject of “Uli for Cultural Rearmament among the Igbo.” Ikwuemesi highlighted the import of bringing Uli to the centre especially as Ms Robyn Sanders, the former ambassador of the USA in Nigeria, earned her PhD on Uli. Ikwuemesi, a lecturer and artist, primed himself as a “creative nomad” inspired by the Nsukka School of doyens like Uche Okeke. Ikwuemesi is poised “to retire to Uli” to work wonders in future with the help of technology.

The host, Prof Peter Umeadi, who had personably led the guests to get vintage liquor and assorted drinks, mounted the podium to mellifluously render two classic poems – J.P. Clark’s “Abiku” and Kofi Awoonor’s “Songs of Sorrow.”

The erudite Oseloka H. Obaze, popularly celebrated as OHO, diplomat, politician and writer who has many books in his stable such as ‘Waning Strength of Government: Essays on Nigeria’s Governance’ and the collection of poems, ‘Africa’s Vision’, masterfully delivered the poems “Come Home” and “Land of Lost Glory.”

The irrepressible Professor Emma Okocha, aka Odezuluwa Ezechime, and Amuma Ndigbo wowed the audience by celebrating his rootedness as an Igbo man of Anioma origin. His repertoire included readings from ‘The Last Dance in the Niger’ as per “Babatunde our Father has Returned.”

The audience stood in reverence when Bongos Ikwue was led to the podium to perform his special numbers Mustapha and Christopher and Man and Man. The legendary musician supplied philosophical insights by cracking The Power of Zero. Bongos Ikwue offered the advice: “Look for money as if you’ll never die; worship God as if you’ll die tomorrow!” In the end, Bongos Ikwue averred, “Humility is the only thing that can conquer arrogance.”

Dinner and more drinks were then served with Deejay Ugochukwu dishing out Bongos Ikwue’s classic songs such as Still Searching and Amen in the background.

Dr. Norbert Eze took to the podium after the dinner and drinks to render his poems “Broken Dreams” and “Change”.

I was thereafter summoned to do justice to my poem “Because of Biafra.”

Phillip Coates, the all-American who would want to be buried in Nigeria after surviving the violence of the United States where his brother was brutally murdered, emotionally rendered the poems We are all Humankind and Unknown Soldier.

Drama took centre-stage with the staging of the adaptation of Dr. Akpos Adesi’s monodrama Money Man’s Diary featuring Chimaobi Okolo and Ugochukwu Ugwu. Directed by Ugochukwu Ugwu, Money Man’s Diary by Adesi is a didactic application of the tragic absence of the parent from the children in the new age. The cast came all the way from Bayelsa State where  Adesi serves as the Registrar of the Medical University.

The global reach of the night gained cubits when Eddy Chukwurah Esq. read one of the greatest poems ever written, to wit, “The Second Coming” by W. B. Yeats from which Chinua Achebe drew the title of his classic novel ‘Things Fall Apart.’

James Eze had to change the poems he had planned to read because he wanted to pay due homage to the Ancient City of Nri. He thus delivered the poem “The Igbo Landing”, a celebration of the 75 captured Igbo slaves in Dunbar Creek, Georgia who chose suicide instead of submitting to slavery in the USA. Eze brought currency to bear on the night with a rendition of an EndSARS poem entitled “Apocalypse”. He rounded up with a voice-over rendering of his poem “Ozubulu” by the veteran Nollywood actor Bob-Manuel Udokwu.

Greg Mbajiorgu, who did a masterful job of coordinating the festival of life on behalf of Professor Peter Umeadi, delved into his favourite subject of plastics in modern life. He performed three poems, namely, Rhythms from #EndSARS Movement, Adventure in a Submarine, and Littering, Littering All the Way.

The other Greg of the night, Greg Odiakosa, delivered the poems After Sixty Years and The Towering Giant from Nri Soars Higher.

Professor Florence Orabueze took to the podium with her poems Okigbo Still Hears the Bang of the Mortar Shells and The Revenge of the Leftovers.

The multi-award-winning novelist, Odili Ujubuonu, gifted the gathering with a sneak reading of his new novel Crows on the Yellow Stream that would be published before the end of the year.

The personable host of polyvalent culture, Professor Peter Umeadi, led the audience into the poetic delights of the Romantic Movement in England through the poem “Abou Ben Adhem” by Leigh Hunt.

The fact that the evening was well-spent in the Igbo homeland of Nri was borne out through the powerful rendition in Igbo of Omenana ndi ga diri ndi by the youthful literary activist Izunna Okafor. Hon. Chubby Eneh capped it all up with Belu Onwu n’aka anyi, naba zie!

Professor Peter Umeadi’s feast showcased Bongos Ikwue in search of true love in the Igbo homeland of Nri, for as Ernest Hemingway penned in a A Moveable Feast: “Never to go on trips with anyone you do not love.”