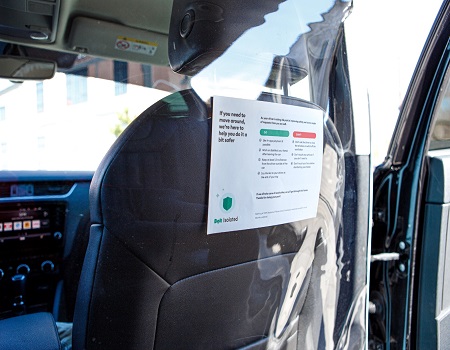 Bolt, a leading on-demand transportation platform in Africa, has introduced a new ride-type in its platform dubbed ‘Bolt Protect’ meant to protect passengers and drivers from COVID-19.

Vehicles under this new category will be fitted with a protective plastic film of nylon installed between the passenger and driver seats acting as a precautionary barrier that limits the airflows between the driver and passengers thus reduces the possibility of the virus spreading through droplets expelled by sneezes or coughs from an infected person.

Speaking on the launch of Bolt Protect, the Country Manager for Bolt Nigeria, Femi Akin-Laguda, stated, “The safety and well-being of our riders and drivers is paramount to us. Yet, even during the virus outbreak, some people still need to move around in the city and we are doing our best to fulfil our mission and help them do so.

“However, we strongly advise all our drivers and passengers to follow the advice of the Nigeria Centre for Disease Control (NCDC) and to take the necessary health measures.”

Bolt Protect is currently available to Bolt customers in Lagos and Abuja, with plans to expand to more cities soon. Passengers are able to choose the new ride-type when they order a car in the Bolt app and will not pay an extra fare since the new category does not attract an additional base fare. The number of passengers in the new category is limited to two passengers per vehicle as mandated by government directives.

Other Bolt services will still be available to customers at the same affordable rates across the 11 locations across Nigeria where Bolt currently operates.