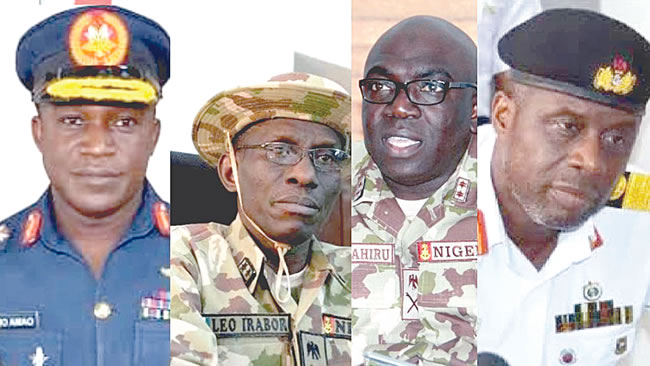 ON a day the newly-appointed service chiefs paid their first official visit to Borno State to assess the security situation, members of the Boko Haram sect invaded Chabal and some communities in Magumeri Local Government Area of the state, killed two policemen and abducted two others.

The terrorists, it was gathered, also seized two operational patrol vehicles and set ablaze another one on the Maiduguri-Chabal Magumeri Road on Sunday.

A source said: “The service chiefs are currently in Maiduguri for their first operational visit to Theatre Command of Operation Lafiya Dole, since their appointment by President Muhammadu Buhari.

“While in Maiduguri, they were briefed at the headquarters of the command and control centre, Maimalari Cantonment, Maiduguri, after which they visited the Borno State governor, Professor Babagana Zulum and the Shehu of Borno, Alhaji Abubakar Garba ElKanemi, to seek their support to end the more than a decade crisis.

“Also, during the onslaught, the insurgents went away with two patrol vehicles after setting one of the vehicles ablaze. ‘Bodies of the policemen were conveyed to Maiduguri with one injured police officer now receiving treatment at an undisclosed hospital in Maiduguri.”

As of the time of filing this report, there was no official statement from either the police or the military.

Speaking during the visit, Governor Zulum called for aggressive collaboration with armed forces in neighbouring countries of Chad, Cameroon and Niger Republic.

Zulum also sought enhanced ties between the military and civilian population to bridge trust deficit and increase military’s access to credible intelligence gathering which, he said, was key to success in the fight against insurgency.

He assured the service chiefs of the commitment of his administration and support to the armed forces by way of complementing their efforts in the ongoing war.

Irabor assured that military operations will receive a boost in order to wipe out the insurgents completely. He, however, craved the understanding of the civilian population in the fight against terrorism.