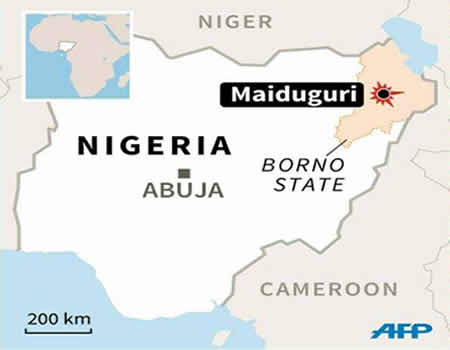 Seven people are alleged to have been killed, while a post-graduate student of Mass Communication and about 26 others are being treated in various hospitals including the University of Maiduguri Teaching Hospital (UMTH) after suffering injuries from four mortar bombs said to have been fired by Boko Haram from Kaleri into Maiduguri.

Seven people are alleged to have been killed, two on the spot, from the rocket-propelled mortar attack which rocked the heavily populated areas of the Borno State capital as at the time of writing this report.

Eyewitnesses near the Customs Office told Tribune Online that the insurgents had on Thursday, fired four mortars into Maiduguri while Muslims were crowded all over the streets making purchases preparing for Eid-Kabir festival which took place on Friday with Governor Babagana Zulum attending open prayers.

Loud explosions were heard in the adjoining London Chiki, Mairi kuwait, Tashan Bama, Fori and even Monday market area where many abandoned their ram buying and took to their heels.

Tribune Online learnt that the mortars were propelled at innocent civilians around Gwange two Primary School, Customs Area near Mansur Motors where the first one fell, and Gidan Ayaba Ngudiba line around the Bama Road axis.

Commissioner of Police, Muhammed Ndatsu, who confirmed the incident said five more bodies were discovered between Thursday and Friday morning and with the initial two that died on the spot where the Mass Communications student was wounded totalling seven.

The Mass Communications student’s (name withheld) escaped death by the whiskers said our source because he left his two friends to go fetch food for his ram only to return to see his two friends on the ground killed by one of the mortars.

Aliyu said that the victims included one female at Gwange 2, and five others who were hit by the explosives in separate locations within the city.

On plans to secure the city, the commissioner noted that the command in collaboration with other security agencies had deployed a total of 7,000 uniformed personnel to secure the entire city.

“Also deployed are personnel from the Explosive Ordnance Department (EOD), Special Anti-Robbery Squad men with armoured vehicles and sniffer dogs, Civilian Joint Task Force, Hunters and the Rapid Response Squad to secure the outskirts of the city,” he said.

Commissioner Ndatsu added that the measure was to ensure a hitch-free Eid celebration and also enhance security in the state.

Ndatsu also warned youths in the state to desist from any act capable of disrupting the peace, adding that they will face the full wrath of the law if they crossed the line.

114 years after, US organisation apologises for putting African man on display in zoo