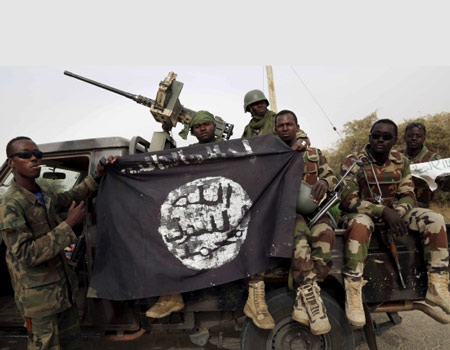 Contrary to what the Nigerian military would have the Nigerian public believe, its offensive against the dreaded terrorist group, Boko Haram is not over. The terrorist group is still alive and well, launching dastardly revenge attacks in unprecedented and sadistic style.

When the Chief of Air Staff, Air Marshal Sadique Abubakar, reassured Nigerians recently in an interview that the military was winning against the Boko Haram, the terrorist group countered with a killing binge on the staff of the University of Maiduguri who, quite ironically, had earlier obtained assurances of protection from the security agencies. Currently, some members of the university’s staff are still being held by the terrorist group as hostages.

The position that Boko Haram has been defeated technically may have prevented the military from an objective self assessment. The United States, for instance, has observed that animosity amongst the country’s security agencies and their unwillingness to share intelligence are hampering efforts at effectively combating Boko Haram insurgency in the North East.

In its 2016 Country Report on Terrorism published by the Department of State’s Bureau for Counterterrorism and Countering Violent Extremism, the US said the failure of the State Security Service ( SSS), which is primarily saddled with investigating cases of terrorism, to share information with the Economic and Financial Crimes Commission (EFCC) makes it hard to investigate terror financing.

Even if the military is saddled with the exclusive responsibility of combating terrorism in the North East, it still needs the support of other agencies in the counterterrorism effort. The Nigeria Police, the Ministry of Justice and the SSS should play vital roles and these functions need a high level of coordination from the Office of the National Security Adviser (ONSA).

To be sure, while Boko Haram may be deploying similar weapons with the military in its campaign, it is arguably fuelled by a different psychological force of rebellion and conviction and this makes it an irregular force that is not constrained by the usual terms of engagement. To curtail and defeat it will require adroit coordination and synergy amongst the agencies and a comprehensive programme for debriefing and rehabilitating the victims.

There has not been enough evidence of coordinated action from all the various agencies involved in the war against terror to assure the nation of the possibility of a comprehensive pacification of the insurgency. The misguided bombing of an IDP camp is a relevant case in point that ought not to have occurred if there had been synergy amongst the forces against terror and if they had been regularly sharing information and intelligence.

The impression given in the circumstances is one of a divided house warring against a determined insurgent terror group desperate to call the bluff of the military and we fear the possibility of prosecuting the war at a steep human price in terms of those returning home in body bags. The recent case of the murdered and abducted staff of the University of Maiduguri is another example of avoidable casualties.

Although the military, according to the Chief of Army Staff, Lt-General Tukur Buratai, is winning the war against the dreaded Boko Haram technically, it still needs to demonstrate that victory by permanently pacifying the terror group. The families who have lost their loved ones in the bloody encounters with the terror group are not likely to believe in the much touted technical victory if they remember their loved ones lost in the war, neither will the ministries of Finance and Defence be able to justify the humongous amount of money being spent in containing the activities of the terror group if palpable reprieve is not yet in sight.

We call on the various agencies involved in the war against terror under the ONSA and the Ministry of Defence to change the current approach and put in place a more coordinated action. They should allow greater synergy amongst themselves and secure a decisive victory in the campaign against terror.

All Pension paid to Senate President has been returned, says Kwara SSG