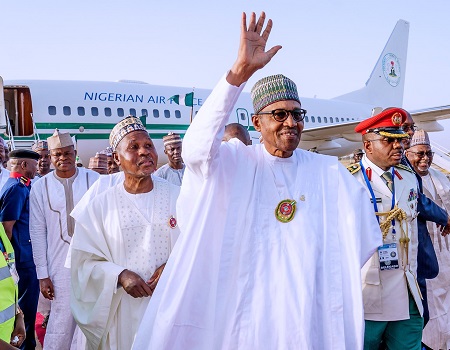 Delighted about Bloomberg rating of Nigerian economy as the strongest in the continent, the All Progressives Congress  (APC) has described it as a rewarding and fitting scorecard of the President Muhammadu Buhari administration.

The APC spokesman, Lanre Isa -Onilu, in a statement said the observation that Nigeria has surpassed South Africa which has since receded into recession “is not a small feat and should be celebrated by all.”

The party further noted that it has been vindicated on its position that the nation’s economy has exited recession and experiencing transformation was not a fluke but a ”result of deliberate practices and policies of the President Buhari administration that has increased transparency in governance, diversification of the economy away from oil, improved fiscal management, and a healthy protectionist approach which has aided the growth and increased the capacity of domestic producers and in turn created jobs.”

The statement read in part: “Nigeria’s re-emergence as Africa’s biggest economy after overtaking South Africa which has entered its second recession in two years, is a rewarding and fitting economic scorecard of the President Muhammadu Buhari administration.

”This is not a small feat and should be celebrated by all.

”The All Progressives Congress (APC) congratulates the President, the APC family, and indeed all Nigerians. Those expecting the worst and wishing the country ill-fortune should now give up. The task of developing a nation is a collective one. Politics should not drive Nigeria apart; it should unite us when the interest of our nation is involved.

”Since the Nigerian economy exited recession in 2017, the country’s economic growth has not been a fluke but a result of deliberate practices and policies of the President Buhari administration that has increased transparency in governance, diversification of the economy away from oil, improved fiscal management, and a healthy protectionist approach which has aided the growth and increased the capacity of domestic producers and in turn created jobs.

”The hugely successful anti-corruption efforts such as implementation of a Treasury Single Account that allows the government to better track and manage its resources and a more transparent government payroll and personnel system that eliminated duplication and “ghost workers” has alleviated poverty and made more cash available for critical infrastructure projects. Private sector investment and confidence in the economy is at a record high as a result of government’s development of a stronger public-private partnership for roads, agriculture, and power.

”Economic growth is being achieved despite dwindling resources as a result of low oil prices. The fact that we are making commendable progress with all the challenges shows this government is doing the right thing. There is no doubt about the determination of the Buhari government to continue to take the right steps to create jobs, grow the economy, create a secure environment, massively develop our infrastructure and develop our other resources through focused and well-reasoned diversification policies.

”The APC government is opening up supports in terms of finance, ease of doing business, and other services to enable the release of the latent creative energies of our youths. Our youths should take advantage of the conducive business environment the APC government is creating by investing their time in productive endeavours. They should free themselves from those who had dragged Nigeria down to the cliff edge and are trying to use our youths to create social disharmony. We call on our very enterprising youths to back out of the destructive course the opposition is leading them and join the current journey into prosperity this government is pursuing.

”Of course, there are still a lot of challenges on the way. The journey is not going to be a walk in the park. That is not unusual, considering the level of decay our nation has sunk into under the watch of the Peoples Democratic Party (PDP) and the current efforts of the PDP leaders to slow down our progress as a nation. However, this government, under the capable hand of President Buhari is single-minded and courageous enough to lead our country to the promised land.”