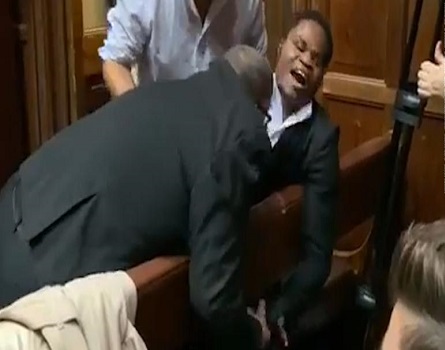 A blind student who was “violently” removed from a prestigious debating society has been cleared of any wrongdoing.

Ebenezer Azamati was “accosted” by a security guard when he tried to return to a seat he had earlier reserved before the debate on 17 October.

He said he was “very pleased” that claims of “false violent disorder” were retracted by the Oxford Union.

The postgraduate student from Ghana said his treatment made him feel “unwelcome in the union, Oxford and even the country.”

The Oxford Union, which is independent of the university, has a tradition of hosting debates and speakers stretching back to 1823.

Mr. Azamati, who is visually impaired, was “forcibly and violently prevented from re-entering the union to resume his seat” before a debate, according to the university’s Africa Society.

It said he arrived at the union in Frewin Court early to reserve his seat in the chamber before the debate and then returned to his college.

The student was then confronted by a security guard when he tried to return to his seat so Mr. Azamati sat in another seat offered by another member before the staff attempted to remove him.

The society said: “Even if he had re-entered when the debate had started, such poor treatment through violent means remains unjustifiable.”

Nwamaka Ogbonna, president of the Oxford University Africa Society, said a security guard had told Mr. Azamati he could not enter the chamber because “the union was full” despite the student having apparently reserved a seat.

Ms. Ogbonna said: “The argument that he had to leave because there were not any seats is invalid. People are allowed to stand.

“I think everyone is quite perplexed.”

‘Video footage shared online showed an argument between security and Mr. Azamati in the chamber before staff appeared to manhandle him.

Mr. Azamati was attending the debate in which the motion “This house has no confidence in Her Majesty’s Government” was discussed by members and politicians from various parties.

The St John’s College student, who studies International Relations, said he was “treated as not being human enough to deserve justice and fair treatment”.

After the charges against Mr. Azamati were successfully appealed on Saturday, the president of the Oxford Union, Brendan McGrath, apologised to the Africa Society “for the distress and any reputational damage” to the student.

Helen Mountfield QC, who represents Mr. Azamati, said there were ongoing talks with the union over what steps it can take to address the “failings” exposed by the case.

The university tweeted its support for Mr. Azamati and said it shared “the widespread outrage regarding the unacceptable treatment” of the student.

It added: “The union is an entirely independent club not governed by the university, but this student’s treatment goes against our culture of inclusivity and tolerance.

“We are pressing the union for answers on how they plan to remedy the issue and ensure this does not happen in the future.”