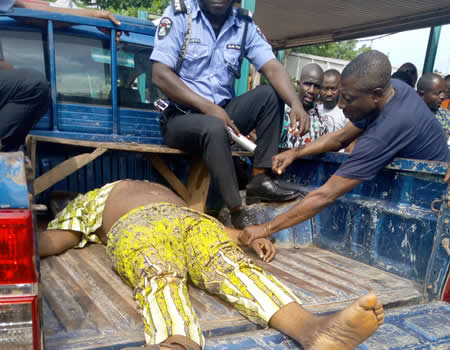 Share
Members of the Vehicle Inspection Officer (VIO),  Ebonyi state allegedly killed a lawyer, member Abakaliki Capital Territory Development Board (ACTDA),  Chief Geoffrey Mgbada in the early hours of Tuesday along Ezza road, Abakaliki, the Ebonyi state capital.
According to eyewitnesses, the VIO stopped the deceased who was in the company of his wife when his vehicle was stopped and one of the VIO members pushed him and the man fell down, hit his head on a concrete block and lost consciousness. The two members of the VIO immediately rushed the deceased to the hospital where doctors confirmed his death.
Meanwhile, members of the community while protesting called on the state government to abolish VIO in the state, stressing that VIO has caused so much pain and lost of lives in the state.
In an interview with Chijioke Mgbada, the son of the deceased who frowned at the sudden death of his father, pleaded to the government to intervene and ensure that the killers of his father are charged for murder and punished according to law.

“I was preparing to go to school (Ebonyi State University) when my mother came in shouting, she was telling me that I should start going to teaching hospital; that my father fainted when he was beaten to coma by the VIO officers.
“When I got there, it was a different thing. To the contrary, my father was dead already. You can see it that I am not with myself now.  The government should ban VIOs and the person that did this should be sentenced to life imprisonment.
“My father is an elder in this state and he is well known, even his Excellency knows him. He is a member of the Abakaliki Capital Territory Development Board (ACTDA) and he is also the secretary of the Elders Council.
However, other relatives that poured out their anger also called on the government to ensure that the people behind the killings are punished accordingly.
Meanwhile, Governor David Umahi has called for investigations and prosecution of the VIO Officers, just as he condemned the killing of the former member of the Abakaliki Capital Territory Development Board and Secretary of the Elders Council.
Umahi in a statement by his Chief Press Secretary, Emmanuel Uzor described the death of the elder statesman as callous and ordered a full investigation into the circumstances surrounding his death in the hands of thugs who paraded themselves as Vehicle Inspection Officers.
On her part, the Ebonyi State police spokesperson DSP loveth Odah confirmed that two members of the team were immediately arrested by the Anti Kidnapping Unit of the Nigeria Police while the leader of the illegal team, an old man was equally arrested.
The body of the deceased has been deposited at the mortuary at the Alex Ekwueme Federal University Teaching Hospital, Abakaliki.