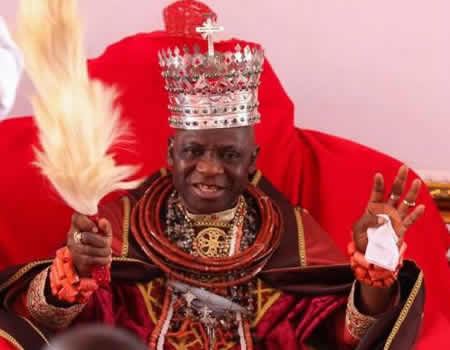 The Benson Idahosa University, Benin, Edo State‎, has conferred honorary degree of Doctor of Humane Letters on the Olu of Warri, His Royal Majesty, Ogiame Ikenwoli, even as the university graduates 721 students at its 13th convocation ceremony on Saturday.
‎Also honoured along with the Olu of Warri was a fellow of the Nigerian Society of Engineers, Rev. Emmanuel Egbagbe, who bagged an honorary Doctor of Business Administration.
In his remark shortly after being conferred with the honorary degree, the Olu of Warri called on young Nigerians to shun acts capable of denying them the opportunity to identify their potentials and‎ take their places in thr country.
The Warri monarch admonished students of the university to shun social vices, such as  cultism, which could bring  sorrow to their parents.
He also urged the graduands to remain dedicated and see themselves as ambassadors of the school.
Ogiame said, “I want them (students) to be more dedicated to their studies so that the labour of their parents in sending them to school will not be wasted.
“We hear of cultism; we hear of fighting and the killing of students. Their (students) parents did not send them to go to school to do that.”
Earlier‎, the Vice-Chancellor, Prof. Ernest Izevbigie, disclosed that 60 graduands, out of a total of 721 graduating students, bagged first class degrees at the end of the 2016/2017 academic session.
Izevbigie, explained that the total figure included 606 undergraduate degrees, with 144 in the second class u‎pper division and 364 in the lower division, while 38 graduands received third class degrees.
‎
He advised the the graduating students not to be intimated by their gender, ethnicity or nationality but be encouraged by the lives of ordinary individuals who had left positive marks on their generations.

COVID-19: Olu of Warri donates palliatives to journalists in Delta