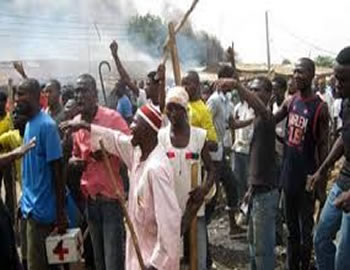 THOUSANDS of Catholic faithful in Enugu State on Saturday held a prayer rally in protest of the repeated Fulani herdsmen attacks in some communities in the state.

The processions, which were held simultaneously in Awgu, Enugu and Nsukka, attracted the attention of Governor Ifeanyi Ugwuanyi who had to pay a visit to the Holy Ghost Cathedral, Enugu, at about 11.45am, to stop miscreants from taking over the protest.

Reports from Awgu and Nsukka revealed that scores of Catholic faithful took to the streets of the towns carrying placards.

It was also learnt that the protesters in Enugu had scheduled to take off at the Holy Ghost Cathedral, after the church service to major streets before moving to meet Governor Ugwuanyi at the Government House, Enugu, to register their displeasure.

However, following security reports, the governor joined the protesters at the church where he assured them of the efforts of the state government to protect lives and property in the state.

Ugwuanyi commended the church for the leading role it had been playing in the struggle against social injustice, human rights violations and other crimes against humanity in every part of the country.

“I wish to sincerely thank you all for the peaceful conduct of this prayer rally. It showed the high regard that the church and its faithful have for the rule of law and for constituted authorities.”

“It was indeed a day that would ever remain dark, sad and solemn in the memory of the people of Enugu State and Nigerians in general.

“We are however consoled by the fact that the whole world had stood by us and offered us sympathy and solidarity, ever since the incident occurred.”