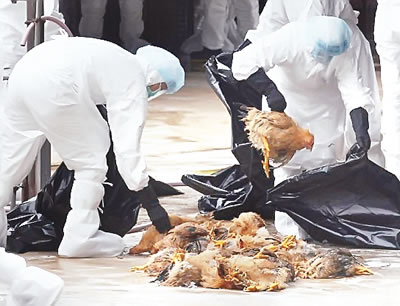 AN outbreak of Avian Influenza (bird flu) has resulted into a N500 million loss for poultry farmers in Kano State.

According to the state branch of the Poultry Farmers Association of Nigeria (PAN), over 223,695 birds were affected with each costing not less than N1,800.

Recall that last week, the Nigeria Centre for Disease Control (NCDC) had confirmed the outbreak of Avian Influenza in seven states of the federation.

Chairman of the Poultry Association of Nigeria (PAN), Kano State Chapter, Alhaji Umar Kibiya Usman, in an interview with journalists explained that apart from the already confirmed number of infected chickens, there were thousands yet to be confirmed.

According to him: “At least, 223,695 chickens have been affected so far. They have been depopulated. This is worth over N402 million. There are also some that are not confirmed. They run into hundreds of thousands. So, the amount of the loss is over N500 million”

Usman therefore urged the state government to take quick steps to mitigate the outbreak of the disease and further enlighten and educate poultry farmers on ways to ensure that their farms were protected from the deadly disease adding that fumigation and disinfection should be sustained at the live-bird markets and other places.

On his part, Director of veterinary services in the Kano state ministry of agriculture and natural resources, Bello Bala, who also confirmed the outbreak, said that the government had gotten the report of the index case from a man who brought his ailing bird for diagnosis.

Bala further explained that when the sample collected from the bird was taken to the national veterinary research institute in Jos for tests, it returned positive for avian influenza.

Following confirmation of the disease, Bala added that the ministry had immediately alerted stakeholders and disinfected farms and live-bird markets in about eight areas in Kano metropolis as well as various places where poultry activities take place.