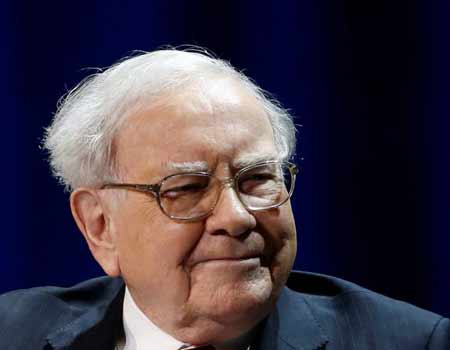 BILLIONAIRE investor, Warren Buffett says Wall Street’s lust for deals has prompted CEOs to act like oversexed teenagers and overpay for acquisitions, so it has been hard to find deals for Berkshire Hathaway.

In his annual letter to shareholders Saturday, Buffett mixed investment advice with details of how Berkshire’s many businesses performed. Buffett blamed his recent acquisition drought on ambitious CEOs who have been encouraged to take on debt to finance pricey deals.

“If Wall Street analysts or board members urge that brand of CEO to consider possible acquisitions, it’s a bit like telling your ripening teenager to be sure to have a normal sex life,” Buffett said.

According to AP news, Buffett is sitting on $116 billion of cash and bonds because he’s struggled to find acquisitions at sensible prices. And Buffett is unwilling to load up on debt to finance deals at current prices.

He said the conglomerate recorded a $29 billion paper gain because of the tax reforms Congress passed late last year. That helped it generate $44.9 billion profit last year, up from $24.1 billion the previous year.

Buffett’s letter is always well-read in the business world because of his remarkable track record over more than five decades and his talent for explaining complicated subjects in plain language. But this year’s letter left some investors wanting more because he didn’t say much about Berkshire’s succession plan, some noteworthy investment moves or the company’s new partnership with Amazon and JP Morgan Chase to reduce health care costs.

Edward Jones analyst Jim Shanahan said he expected the 87-year-old Buffett to devote more of the letter to explaining his decision to promote and name the top two candidates to eventually succeed him as Berkshire’s CEO. Buffett briefly mentioned that move in two paragraphs at the very end of his letter.

“He didn’t say a lot about succession. I was expecting more,” Fox said.

Shanahan said it also would have been nice to read Buffett’s thoughts on why he is selling off Berkshire’s IBM investment but maintaining big stakes in Wells Fargo and US Bancorp.

But Buffett did offer some sage investment advice based on his victory in a 10-year bet he made with a group of hedge funds. The S&P 500 index fund Buffett backed generated an 8.5 percent average annual gain and easily outpaced the hedge funds. One of Buffett’s favourite charities, Girls Inc. of Omaha, received $2.2 million as a result of the bet.

Buffett said it’s important for people to invest money regularly regardless of the market’s ups and downs, but watch out for investment fees which will eat away at returns.

Succeeding in the stock market requires the discipline to act sensibly when markets do crazy things. Buffett said investors need “an ability to both disregard mob fears or enthusiasms and to focus on a few simple fundamentals. A willingness to look unimaginative for a sustained period – or even to look foolish – is also essential.”

Berkshire owns more than 90 subsidiaries, including clothing, furniture and jewellery firms. It also has major investments in such companies as Coca-Cola Co. and Wells Fargo & Co.