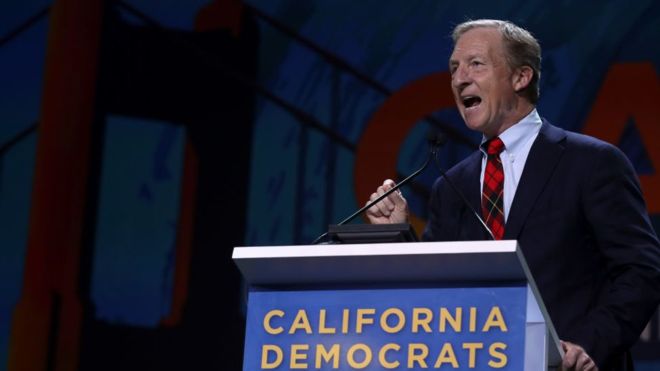 Billionaire Tom Steyer has announced a 2020 presidential campaign, adding his name to a crowded pool of Democrats vying to unseat President Donald Trump.

An environmentalist and advocate for the movement to impeach Mr. Trump, he has donated millions to liberal causes.

Mr. Steyer’s launch video focused on “pushing power down to the people” and blaming corporations for most of the nation’s “intractable” problems.

The California financier had previously said he would not run for office.

“Americans are deeply disappointed and hurt by the way they’re treated by what they think is the power elite in Washington DC,” Mr. Steyer, 62, said in his campaign video.

“Almost every single major intractable problem, at the back of it you see a big money interest for whom stopping progress, stopping justice, is really important to their bottom line.”

He used climate change and the opioid crisis as examples of how corporate interests were negatively affecting the nation.