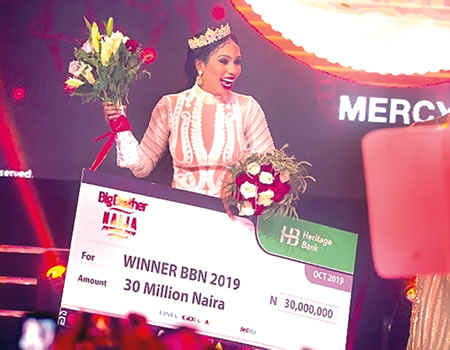 ROTIMI IGE writes about how the recently concluded Big Brother Naija season 4 Pepper Dem shaped and sustained conversations around the world for 99 days, became an investor’s hub, and ultimately a veritable platform for promoting indigenous content.

The Big Brother Season 4 has come to an end and Mercy Eke emerged the winner of the N60 million ultimate prize. Mercy became the first female ever to win the BBNaija reality TV show since it began over a decade ago.

Mercy, the last female housemate standing after spending a total of 99 days, beat 26 other Housemates to emerge victorious on Sunday, October 6, 2019.

And on Tuesday, the organisers, true to their word, presented Mercy with the  N30 million cash prize, a top of the range SUV from Nigerian automaker, Innoson Motors; a trip to Dubai for two, packaged by TravelBeta; a home make-over courtesy Scanfrost; a year supply of Pepsi and One Africa Fest VVIP experience; a year supply of Indomie noodles and Munch it; and a brand new Oppo mobile smartphone. There’s also a bonus prize of two VIP tickets to watch a European Football final game live, courtesy Bet9ja.

The show, by all standards, has become the most anticipated, watched and engaging reality television series, with each successive season becoming bigger than the last. With viewership by millions across Nigeria and the world, engagement of social media and physical conversation generated daily, Big Brother Nigeria has successfully become the toast of investors and the business society.

This was evident this year, albeit aided by the relocation of the Big Brother House to Nigeria from South Africa, as various brands used the platform to showcase themselves in various forms. From T-Shirt branding, task challenges, Arena games, Saturday night party gifts for Housemates, the brands cashed in on the opportunity to reach millions, and they did.

Telecoms and data provision companies  also smiled to the bank, thanks to the show, owing to the millions of votes that poured in throughout the duration of the show, as voters could only vote to keep their favorites in the House.

Ebuka, during Sunday’s finale, revealed a total of 240 million votes across all platforms, and 50 million in the final week, the highest ever in the history of the show. This revelation, indeed, positions the show as one to delight any investor. This fact also stresses the importance and relevance of entertainment business in Nigeria as a whole, showing that revenue streams from the industry,  if well harnessed, can become a big earner for all involved.

Also, while the show lasted, it created jobs for thousands of professional technicians, production professionals, engineers, content creators, artisans, entertainers, etc who worked tirelessly to deliver a world-class show, made in Nigeria.

While the show lasted, a lot of discussions were centering on the rationale behind it were held. And these usually dwelled on morality of the franchise. Many didn’t understand why a certain number would be boxed in a house with cameras monitoring their every move. There was also public outcry about the nudity and certain aspects of the show that were deemed ‘inappropriate’.

However, there is a bright side to the narrative judging by the number of lives touched by the exercise in and outside the House. While many Housemates  discovered talents that had largely been unexplored in the House, others discovered sides of themselves that they would rather do without. In Omasola’s words, “Big Brother’s House made me rediscover myself! I never thought I could do a lot of things that we were asked to do and was pleasantly surprised when I excelled at them. Also, I saw parts of myself (behaviours) that I would like to change as soon as possible.”

Many other Housemates also shared this narrative at various times during the show and later became better people. This also has, via various testimonies from fans online, happened to various watchers of the show who mostly mirrored real life situations presented in the House with theirs.

Mojisola Anyia, a psychologist said, “Most times, people pick their favourites based on relatability to self. Often times, you support who you see yourself as”.

This was probably evidenced by the various support groups outside the House where some supporters felt Seyi, Jackye and a few others were the ‘intellectuals’, Omashola, Frodd, Tacha and Mercy were the ‘street-breds’, Mike, Nelson, Elozonam, etc were the ‘ladies men,’ etc.

Indeed, seeing that the show is a reflection of the society at large, it is safe to say that the Big Brother show offers entertainment as well as education, depending on what is important to the viewer.

Data analysts, social critics and commentators have, after seeing the volume of votes cast during the show (240 million in total) concluded that the Nigerian general election could indeed be done via electronic voting, if it could be improved upon, transparent and secure enough. They opine that if the Big Brother franchise could effectively utilise the voting pattern, it was probably what the Independent National Electoral Commission (INEC) should understudy and try to deploy in the coming elections.

While the show may have ended for this year, one thing that is sure is that the Big Brother franchise is perhaps the biggest entertainment reality platform in Africa. Aside the thousands of jobs that it offers professionals yearly, millions of young people across that country have realised the huge potential that exists within,  and so, with all the trappings that the platform offers, Nigerian youths have one more thing to aspire for…becoming a Big Brother Housemate.

‘Every job seeker should become an entrepreneur’