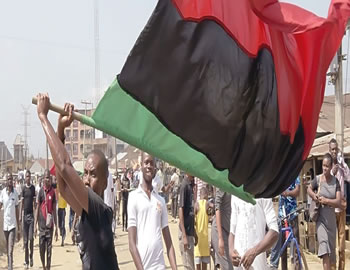 THE Leader of the Biafra Zionist Federation (BZF) Benjamin Onwuka on Tuesday claimed that save for the intervention of the United States of America (USA) he would have been dead by now for declaring an independent state of Biafra.

Onwuka, a self acclaimed President of Biafra, had two weeks ago named some prominent Nigerians as members of his cabinet. He had first declared Biafra and announced himself as President.

Ironically, most of those he named in the cabinet have rejected the appointment.

However, speaking to reporters in Enugu on Tuesday, Onwuka said he was going ahead with his project, even as he further claimed that the US was solidly behind him.

While recalling the events during and after his over two years detention after his group attempted to seize the Enugu State Broadcasting Service, ESBS, he said, “I want to tell the world how American government and the British government got involved in this matter.

“Before Barrack Obama left office, he did not just save our lives but recognized Biafra’s independence; that’s our main achievement.

“That’s why I don’t understand why some people are talking about restructuring. We don’t want any form of restructuring. Remember we are the first people to talk about restructuring in 1967 when we went to Aburi; our leader the late Dr Chukwuemeka Odumegwu told them that the country needs to be restructured along the path of confederation; they agreed, signed everything but on getting to Lagos, they abdicated from what they signed.

“That was how the issue of Biafra came up and then the civil war. So, restructuring is unacceptable to us. Now that America has said yes to Biafra, there is no going back.

“Our people are being killed every day in the North since 1945 and nobody has ever been arrested. This has been going on; whenever an Igbo man is killed, nothing happens.

“In 14th May, 2016, a woman from Imo State, Bridget Agbahime was killed for just telling a Northerner not to do oblation in front of her shop, she was killed and till date nobody has been tried for her death.

“That is why the Biafrans are saying we are no longer comfortable with the system called Nigeria.

“On the issue of the ESBS, we just came after our vigil to make the world hear the killings of Ndigbo. We were not armed at all.

“We went there to make our cases known that the killings must stop; when we got there, they opened fire on us, shot dead one of us; they were already waiting for us.

“When the shooting started, we had to take off; on getting towards the Michael Okpara square, we didn’t know some plain clothe policemen were also waiting for us. As soon as they saw us coming, they shot the persons walking by my side; they thought I was the one, because he was taller than me.

“Earlier, they shot another of our member dead; till date we don’t know where his body is, whether he has been buried or not.

“They arrested 12 of us and from there, they took us to the Independence Layout Police Station. They invited the entire security chiefs in the State to come and see Onwuka. They tortured me, broke my two ankles, that was 5th of June, 2014.

“From there, we were moved to the State CID, with my hand bound behind me till morning, naked. On the 6th of June, we were then moved to Abuja.

“On getting there, they kept threatening us; that I was going to die in this journey. Nobody was allowed to visit us, no food, no medical attention. I was separated alone in a very deadly cell.

“They even went behind and sentenced us to death. When we heard that, we started seeking of help, because nobody was ready to take up our case, not even lawyers.

“We decided to contact the US, because they are the only one that can save us. I had to make a case to the then US President, Barrack Obama, and without his intervention, I won’t have been alive. We wrote Obama to save us and to recognize Biafra. It was a 70-page letter for Obama; 35 –page letter for the British Prime Minister, 22 pages for the British Foreign Secretary and 20 pages for the Israeli Prime Minister.

“We made a passionate case to America on why they should support us. We made a careful analysis to the US President on why Biafra should be supported and why our lives should be saved.

“Exactly one month after, people that were telling us that we were going to die never came again. No police officer ever came to harass us again.

“We now heard that it the US has intervened and that it was in the papers, that Obama has declared support for us and for Biafra.

“Then, precisely on October 27, 2014, suddenly they came to inform me that they were preparing a bus to take us down to Enugu; they began to pet me. They dropped the entire 12-count charges against us.

“That was how US saved us from this journey; without America, we won’t be alive today.”