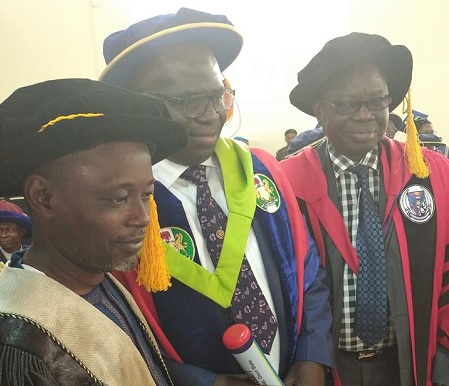 The newly elected Students’ Union (SU) executives of The Polytechnic, Ibadan, Oyo State have been advised to eschew internal wrangling and destructive youthful exuberance, which can tarnish the image of the institution.

Professor Kazeem Adekunle Adebiyi, the rector of the institution, gave the charge Friday last week at the inauguration of the students’ union executives and students’ representative council, held at the North Campus Assembly Hall of the institution.

“It is imperative to note that students’ union is not a vehicle for intimidating members of the public and fellow students. Under no circumstances must students’ leaders take laws into their hands in the guise of ‘Aluta’.

“Note that every member of the students’ union executive and the senate had signed a matriculation oath which must be abided by. You are therefore subject to the authority of the management and board of studies,” Professor Adebiyi told them.

He urged the new executives to also ensure that their academics do not suffer at the expense of engaging in union activities.

He assured them that the management would always welcome their constructive contributions towards the growth and development of the institution as partners in progress, but would not condone any act of lawlessness, hooliganism or dictation on the part of the students’ leaders.

Professor Adebiyi also thanked the state governor, Seyi Makinde, for his tremendous assistance to the institution and promised the loyalty of members of staff as well as their devotion to duty.

Earlier, the newly elected president of the students’ union, Mr Blessing Fiyinfoluwa Fadare, had promised to mobilise his fellow students to support the management’s efforts towards uplifting the institution.

He equally promised a peaceful administration based on a constructive approach to issues.