Between election violence and the spoils of office 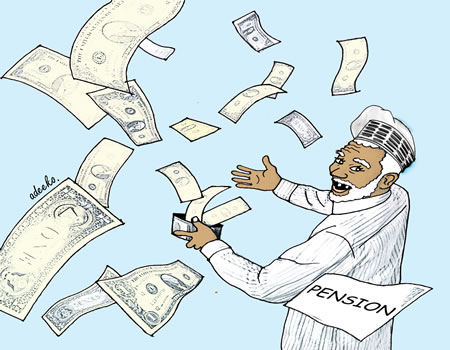 NIGERIA’S elections are always a period of haemorrhage, seasons of internecine bloodletting. Just do a study of our cyclical polls. None came and went away without taking away precious souls. They have all soaked us in blood before, during or after the ballot. Even the June 12, 1993 presidential contest we celebrate didn’t consummate its benignity. It wasn’t allowed to. The vampires showed up to ruin the chance to dance. They annulled what Providence offers only once in a lifetime. What we got on the proverbial silver platter, we have since been looking for in a golden platter. It’s been quite an agonizing quest, made unbearable by the high toll in the lives we lose when we blow the whistle for electioneering.  Unfortunately, and tragically so, what we get at the end of each exercise, mostly incompetent and self-serving politicians and office holders, does not justify the enormous resources we load into the project. You go into an enterprise to return with profit and fulfilment. But Nigerians have been repeatedly outwitted, short-changed. We heed the call of the authorities and the political lords to sacrifice our precious time, to set aside the work that earns us the little to live on and to brave the inclement elements of nature and those posed by hoodlums and uniformed men and all we harvest are death of dear ones and a parasitic club of men and women. We never get what we are promised, either by those who run a term or two. It isn’t remunerative business; receiving dross, lossand curse after you have pumped much into the deal in fervid hope of mouth-watering returns. Why must we experience such grief at the threshold of potential joy?

The 2019 election is gone, or substantially gone; but it is a spectre that has thrown itself into our future. That is to say that poll violence and the (s)election will go on leave now, to resurface when we are set for the ballot in four years. But the good news is that these recurring demons are not invincible. We can exorcise them if we degrade public office and politics as a haven of prosperity. The weapon to deploy in our fight against murderous politics and thieving political office holders is to abolish wages for them altogether. The spirit of do-or-die in political contests arises from the backward mentality that political office is worth dying for because it is the god that drives society’s resources. So, why won’t you worship it and fall at its feet for survival? Why won’t you seek to invest your blood in it? Why won’t you thrash the Spiritual injunction and then begin to seek first the political kingdom so that all other things shall be added to you? The way out, as I proposed sometime ago, is to disincentivise politics and its so-called spoils by making public office disagreeable to those whose goal is to make a fortune and not to serve. Some concerned citizens whose position matches this view suggest we drastically reduce the pay and allowances of our politicians. But I want us to go beyond this pay-cut option, because in my opinion it only addresses the issue halfway, not dealing it a deathblow. Secondly, it opens the way for abuse and underhand bargain with the civil servants for doctoring of figures in respect of the office holders’ wages. Thirdly, there will be hardly resistible clamour for salary increase to reflect ‘economic realities’ as we often put it.

To eliminate these foreseeable challenges, we should aim for a system that ‘de-wages’ all political office holders, from the presidency and aides and federal cabinet down to the governors and their ruling paraphernalia with the local council administration. They all should be sustained by the state. Our tax would maintain them and their families. Their school-age children will attend public schools. They and their families will be barred from seeking medicare abroad or in private facilities here in Nigeria. The state will be responsible for all the basic needs of their families during and after their tenure. They would not have to be anxious about their future or that of their dependents after such a selfless service to the people. It is such fear of the future, the uncertainty of the years that would follow your alienation from office, that creates the cradle of corrupt enrichment in politics and the civil service.  But in the system we are proposing, the state would look after the public officer who has sacrificed for the people. The state will be there for them. Naturally, there won’t be luxury and free money in that regime of selflessness of work for the people. It is the fantasy about the state’s bottomless wealth being the property of the political office holder that is responsible for the violence that accompanies our elections and politics.

We call it the spoils of office. But they are the catalysts that call forth the bantamweight of our society to aim for leadership. These sybaritic adventurers don’t give us our best. They throw up the barbarian for the noble work of the land, bringing out the truth of Benjamin Franklin’s remark: the lightest personalities are always in charge. Their heedless hunt for spoils of war and office delivers nothing but violence and stunted growth. Let’s save the nation by denying them a foothold in the future.

Ojewale writes in from Lagos.