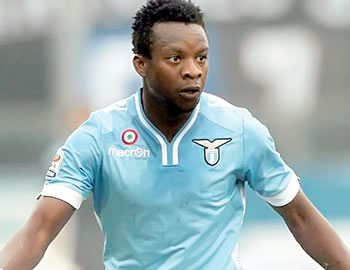 Besiktas of Turkey has reportedly contacted Lazio of Italy on the possible signing of Nigeria midfielder, Ogenyi Onazi.

The Turkish champions which already have another Nigeria international, Kenneth Omeruo, on loan for the new season, are believed to be eyeing Onazi ahead of the new season.

“This week, Besiktas have made an official enquiry for Onazi and it is now left to be seen if they will accept a bid for the player,” a source informed AfricanFootball.com.

It will be recalled that Onazi, two years ago extended his contract with Lazio till 2018.

Lazio had a few hours ago announced the contract of Bielsa, a former Athletic Bilbao coach who takes over from  caretaker boss, Simone Inzaghi.

Bielsa, is scheduled to lead the Serie A side to its pre-season training camp in Auronzo di Cadore, Italy on Sunday.

“The club would also like to announce that, based on the communication we have received, the coach and his staff will be in Rome on Saturday July 9,” the club said in a statement.

Meanwhile, Onazi has since rejoined his Italian team after his honeymoon in Dubai, the United Arab Emirates.

The 2009 FIFA U-17 World Cup silver medallist, who had a white wedding last month in Lagos, reportedly on Tuesday alongside team-mates undergone athletic and respiratory tests and was given a clean bill of health by the club medics.