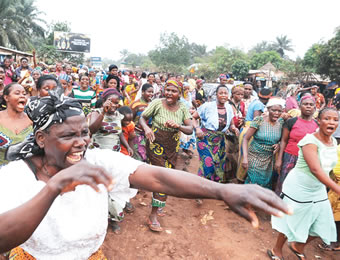 PROTESTERS under the aegis of the Benue Women Forum on Thursday stormed the National Assembly to protest recent attacks in Benue State.
The protesters in their numbers carried placards with various inscription decried the recent killings in their state by suspected herdsmen.
The protesters in a letter to the National Assembly addressed to the Senate President, the Speaker of the House of Representatives and the National Human Rights Commission, said that they want President Muhammadu Buhari to support the anti open grazing law enacted by Benue state government.
The women in their protest letter said that, “Mr. President, as the Chief Security Officer of this great nation, ensure that Miyetti Allah gets its members to adhere to the Open Grazing Prohibition Law in Benue State. They will listen to you as their life Patton. Otherwise, you will be seen as being complacent to the lawlessness of armed marauding herdsmen with the Benue people not having any protection under your government.”
While decrying the killings, the women said that, the invasion resulted in massive destruction of property and means of livelihood . This unfortunate incidence deliberately targeted the harvest season so that  the destruction of farm produce is massive. This is intended to leave the people hungry, homeless and impoverished.

According to them, “On the 1st of January,2018 armed herdsmen members of Miyetti Allah launched unprovoked attack on several communities in Guma and Logo local government areas of our Benue State while the people were sleeping , killing and maiming ( including women and children). Pregnant women were cut open their unborn babies slaughtered like animals. “

The group said the enactment of the anti- open grazing law was because of incessant attacks, ” and intended for the protection of both livestock and crop farmers.”

The Miyetti Allah they said had boasted they would not obey the law and that the sudden attack is a proof of it.

“Mr. President, sir is this possible under your watch that people of a state are annihilated under you? You are said to be life patron of Miyetti Allah, what is your counsel to them.