Benin residents have pleaded with Governor Godwin Obaseki of Edo State over the need for him to help to fix the bad section of the Benin-Sapele expressway.

The residents who made the appeal, when speaking with journalists in Benin on Monday bemoaned the collateral damage the bad section of the highway had caused them as they go through daily agony commuting on the road.

The residents lamented that the section of the highway, stretching from Limit Road Junction to the Benin-Warri-Lagos by-pass, especially the RCC Junction, in Benin, had been in a terrible state and had continued to cause daily gridlock on the road.

They said that the gridlock had resulted in a daily loss of man-hour and had equally damaged many vehicles, which, on a daily basis, spend endless hours in the gridlock.

One of the residents, Mr Vitalis Eshokene, said that the call had become imperative since Governor Obaseki had on a number of occasions, made promises to take over some federal roads in the state to alleviate the agony the people experience. 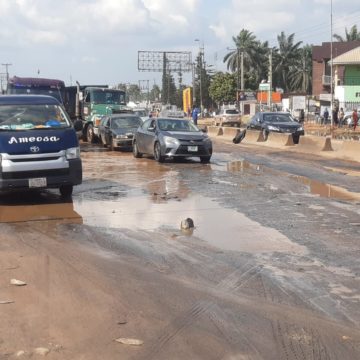 According to him, “You will recall that the governor had some time in 2018 threatened to take over the Benin-Auchi highway when he visited and saw the state of the road before the Federal Government quickly intervened by fixing the highway.

“The same thing happened just a few months ago when the deputy governor threatened that the state would also take over a federal road project in Akoko-Edo for being poorly executed.

“Now we are simply begging the state government to fix the Benin-Sapele highway by taking it over from the Federal Government.

“The Benin-Sapele road has been in a terrible state since last year and the same government seems not bothered about it. It will interest you to know that the bad section of the highway is right inside the city,” Eshokene stated.

Speaking in like manner, Mr Ebidah John, said that the state of the highway had slow down economic activities, especially farm produce, coming into the city from Ologbo and other adjoining communities in the state.

He noted that it was high time the governor quit playing politics and truly take over the fixing of the federal road by seeing that the Benin-Sapele highway was fixed.

“We all knew that the governor merely played politics when he threatened to take over the responsibility of the Federal Government by fixing the Benin-Auchi highway.

“In the case of Benin-Sapele highway, we are simply begging him to take it over by fixing it; the trauma people face daily on this highway is unbearable,” he lamented.

Also, Mr Abel Omoruyi, who noted that most population of the people that transverse that road daily reside outside the city, regretted that the highway had been left unattended for an unusually long time.

He called on relevant government authorities to act fast to end the suffering residents and other users of the highway experience on a daily basis.

Ministry of Environment budgets N1bn for tree planting in 2022

Abiola died after falling ill, he was not killed — Gen Abdulsalami