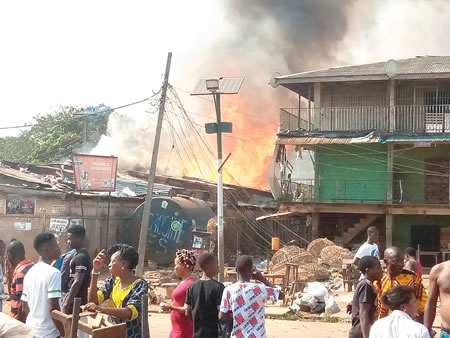 It was a painful blast from the past and the victims will no doubt have to live with sour memories for a long time to come. It was one fire incident too many. Months before, the bustling motor spare parts market at Uwelu had gone up in flame, leaving tears, sorrow and deep pains.

Benin residents were yet to get over it when Santana Market on Sapele Road was consumed in a midnight inferno on October 20, 2019. Several hundred traders were rendered jobless and goods worth millions of naira were destroyed on both occasion.

Broken hearted by the sight of his shop which was completely razed down in a midnight inferno at Santana Market, a middle aged man was said to have slumped and died.

It was weeping and wailing by other traders who came in a determined bid to rescue their goods at the market on Sapele Road but were confronted by the devastation as goods worth several millions of naira were lost in the inferno.

The deceased whose name was simply given as Biggy reportedly arrived at the market early in the morning after church service for the day’s business only to meet the devastation.

An eye witness who gave her name as Itohan explained that Biggy who apparently got emotional simply “froze and fell to the floor” and was immediately rushed by sympathisers to an undisclosed hospital for medical attention but died on the way.

Still reeling from the impact of the two infernos, it was with great trepidation that city residents received news of yet another fire which totally consumed the popular Ekiosa Market located right in the heart of the Edo State capital between Second and Third East Circular Road on December 22, last year.

In deep distress, a trader, Mama Esosa wailed. She said that she was taking a nap shortly after returning from an early morning religious outing when her mobile telephone rang. It was a colleague on the other side of the telephone. “Fire, fire!” She screamed. “Ekiosa burning.” Her gaze fell on the wall clock. Time was a quarter afternoon noon.

She literally dashed off to the market. Her heart almost skipped a beat at the devastation that confronted her. She had just stocked her store with bags of rice, groundnut oil, seasonings and different foodstuffs worth over a million naira, ahead of the Yuletide.

Everything she had was up in flame. All that she surveyed was a wasteland. Her spirits sank when she was told that fire fighters did not show up immediately. They only came with a truck hours after the fire started.

In the inferno, goods worth several millions of naira were destroyed in the midday fire which engulfed the popular market.

An eye witness who simply gave his name as Efosa affirmed that traders and sympathisers watched helplessly as fire fighters refused to show up, hours after the inferno which touched a part of the nearby headquarters of the Edo Development and Property Authority (EDPA).

The inferno defied all efforts by sympathizers to put it off and spread to the entire shops in the market.

The area however became tense after angry youths confronted the University of Benin (UNIBEN) fire service truck which was finally deployed to put off the fire at the EDPA.

One of the rioting youths who simply identified himself as Efe said: “From what we witnessed, the fire fighters deliberately did not show up even when some traders made frantic efforts at reaching them.

“They only came after the fire spread to EDPA and wanted to put it off. In anger the youths and some of the traders pursued them.”

He said that the timely arrival of armed soldiers and other security agents saved the situation.

Efosa said: “I live around here. I was in my house when we heard market women shouting fire, fire shortly after BEDC restored power around 12 noon.

“We all ran into the market and discovered that the shop that was burning was locked. So we could not do much to put out the fire. And before we could figure out the next line of action, the fire had spread to other shops.

“Some people called fire service and their response was that they don’t have water. We were helpless as we could not put the fire out with bare hands.”

The state government however pointed fingers at suspected arsonists whom it insisted were in league with unscrupulous politicians out to sabotage markets in Benin metropolis and the activities of the state government.

Governor Godwin Obaseki who visited the scene shortly after the incident with members of the state executive council to inspect the extent of damage remarked that the incident was not an accident but the handiwork of arsonists out to sabotage markets and discredit the government.

The governor who approved the release of N100 million to compensate traders whose goods were destroyed in the fire incident, noted that it was unfortunate that different markets in the state have been gutted by fire within a short period, a development he attributed to the antics of the enemies of the state.

The governor said intelligence reports indicated that some people who are disgruntled over his reforms and programmes targeted at improving the welfare of the people, were behind the recent infernos in markets.

The governor decried the new dimension of fire incidents in the state, where these suspected arsonists, prevent firefighters from gaining access to markets being gutted by fire.

Obaseki charged: “They say they want to shame us; they tried other tricks, but did not succeed. They say they will cause havoc, but their plans will fail.

“You cannot tell me that the fire on the 6th floor of the EDPA building was an accident. It is a clear case of arson. We had passed the market to Edo Central Senatorial District. We got to hear about the fire at about 10am. The Fire Department was sent in from the University of Benin (UNIBEN), but the people attacked them.

“When a similar incident occurred, firefighters came in to quell the fire in Oliha market and the people chased them. There is a pattern to what they are doing.They should try whatever they like, but we will continue to work for the people of the state; they cannot remove us from Edo.”

The governor promised that the market will be rebuilt from early this year, while a section of it would be cleared for the traders to use as a temporary arrangement.

He added that the state government has decided to take over the security of markets from local councils and would work with market associations to secure markets, noting that markets without fire extinguishers and borehole would be shutdown.

Responding to the proposed security framework for markets, the Edo Commissioner of Police, Mr Lawan Jimeta, said he would deploy his men to ensure the success of the arrangement and provide the needed strategic backing.

Efosa was however furious. He made it known that the state fire service is moribund, adding: “The government must stop the blame game and invest in the fire service to prevent the fire next time.”

We must imbibe road maintenance culture —Oyo Commissioner for Works