HENDRIX OLIOMOGBE in this report writes on the frustration of motorists plying the Benin-Auchi-Okene road and ongoing efforts to rehabilitate the road. 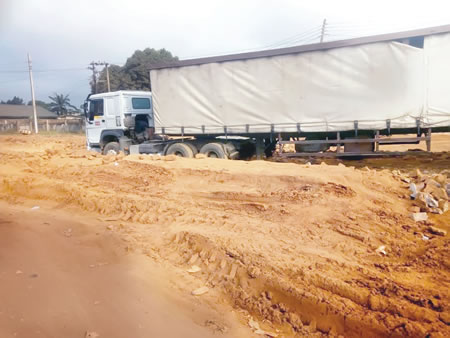 LOCATED about 160 km from the state capital Benin the journey to the northern Edo town of Auchi which ordinarily is supposed to take one and a half hours now lasts over five hours as a result of the terrible state of the Benin-Auchi road.

Riddled with potholes and deep gullies, travelling on the road which also leads to the university town of Ekpoma in Esan West Local Government Area of the state is now a nightmare.

The strategic road connects Benin City to Iyamho, the hometown of Adams Oshiomhole, the national chairman of the ruling All Progressives Congress (APC), the  cement factory town of Okpella, Etsako East Local Government Area to Okene, Lokoja, both in Kogi State and all the way to Abuja, Kaduna, Zaria and Kano.

The smoothness of the road from uptown Ramat Park, Benin City where the road starts will see a first-time traveller of the road amplifying the recent declaration by the Minister of Works, Mr. Babatunde Fashola that “Nigerian roads are not all that bad.”

As one cruises on the road from Benin City which dualisation work was kick-started by former President Goodluck Jonathan in January 2013 under ex-minister of works, Mr. Mike Onolememen, he takes a glance at the clock on his dashboard, grinning that he will be home at Auchi in less than two hours, only to be confronted with deep trenches, a few kilometers after suburban Benin City where work has since stopped.

Dualization work on the road which was ongoing, albeit at a slow pace during Jonathan’s tenure was completely abandoned for almost four years when President Muhammadu Buhari took the reins of power in May 2015, only for remedial work to start shortly before the last elections.

Besides the potholes and trenches, the ever-busy road is always muddy each time it rains and a deathtrap where so many ill-fated vehicles run into ditches, resulting in several fatalities.

The road also connects the eastern parts of the country with Abuja and the north. A traveller from the market town of Onitsha, Anambra State connects the road at Uromi junction.

The pitiable sight of agonising travellers sleeping on roadsides as a result of broken down vehicles ranging from cars to sports utility vehicles, mini buses, luxury buses and trailers is a common occurrence.

The road is a perfect study in neglect as the dualisation work stops shortly after Egba junction while motorists will have to navigate and meander their way through the highway which is fast turning into an earth road.

A motorist driving on the pan-Edo road which cuts across the three senatorial districts of the South, Central and North can at great efforts and nerves manage to drive to Ehor, the headquarters of Uhunmwode Local Government Area but will be blamed for overstretching his luck should he dare to brace it to Ekpoma which now takes two hours to Benin City instead of 45 minutes when the road was better.

All that highway robbers and kidnappers, who before now had to block the road with woods and rocks, do now is to simply lay a snare at any of the trenches and pounce on any unsuspecting and unfortunate motorist of their choice.

Ironically, the APC national chairman, the Edo State governor, Godwin Obaseki, the Oba of Lagos, Oba Rilwan Akiolu and other top dignitaries who came to Iyamho for the recent maiden convocation of Edo University (EU) went by air from and to Benin City in an attempt to avoid the hellish road.

Transport fares have since skyrocketed as the few commercial vehicles who dare rush in charge exorbitant amount as it is the only way they can break even.

A driver who identified himself simply as Omoh said that in order to avoid the road, he has to embark on an ‘Israelite’ journey to Ondo State on the Benin-Akure road before hitting Edo State from Owan West local government area and then to Auchi in three and a half hours. 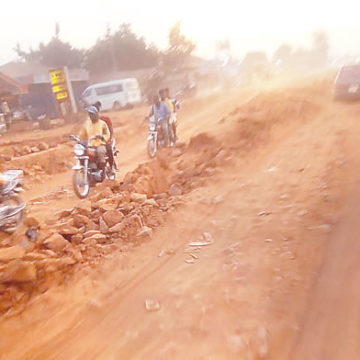 Travellers, who before now had to pay a thousand naira will need to cough out N3,000 for the same journey, an increment which Omoh insisted is justified considering the terrible state of the road which connects the oil-rich Niger Delta region of the country to the northern part.

Omoh lamented that on several occasions he has got stuck in the mud and is always a guest at the mechanic workshop each time he dares travel on the road.

He wailed: “We used to travel to Auchi from Benin three times a day when the road was good. Then it took one and a half hours to get to Auchi, but with the current state of the road, any driver who travels on the road now will have to visit a mechanic workshop each time he comes back and is at the mercy of robbers and kidnappers.

“We practically sleep on the road. Now that Christmas is very near, the government must do something about the road. A lot of people travel during festive season and so the government should accelerate work the road. People are suffering. Travelling from one part of Edo State to another on the road and to other parts of the country is now a nightmare.

A Kano based tomato farmer who simply gave his name as Umar, lamented that it now takes him two days to travel from Kano to Benin City instead of twelve hours. On several occasions, his goods have perished on the highway, resulting in significant losses.

Mallam Umar said that haulage costs have tripled and have to pass the burden to consumers as it is the only way to stay in business.

He said: “The Benin-Auchi-Okene-Lokoja-Abuja road is in a terrible state. We now sleep on the road for two days to get to Benin from Kano. Transport fares have skyrocketed, a situation which has led to the high cost of beans, tomatoes, onions, yams and other agricultural produce from the northern part of the country.”

Fashola has visited the road severally to assess the extent of work, promising to fix it within a record period but the contractors stop working as soon as his motorcade heads back to Benin Airport to catch a flight back to Abuja.

The federal controller of works in Edo State, Mr Oweh explained that the road had started showing signs of failure even before the commencement of dualization work by the Federal Government.

Oweh said that the contractors will have to work at the pace which funds are made available to them by the Federal Government.

The controller disclosed that three contractors, Dantata and Sawoe (D&S), Mothercat and Reynolds Construction Company (RCC) are in charge of the dualization project and are working. While D&S is in charge of section three which runs from Ekpoma to Auchi, section two which covers Auchi to Okene is being handled by Mothercat and Benin to Ekpoma which is section four is being built by RCC.

While section four, the longest stands at 67km, section two is 63km while three, the least is 52 km for a grand total of 182km.

He however conceded that some sections of the road got very bad during the rains and have been a source of deep concern to the government because of the difficulties they pose to motorists.

Oweh said that he had long time ago drawn the Federal Government’s attention, noting that the government has tapped RCC to repair the existing road at the different portions in section four where it failed.

Continuing, Oweh noted that Dantata and Sawoe did repair work at Ekpoma but got very bad during the rainy season.

Sounding upbeat, he said: “Government has again given approval to D&S to repair the failed portion of the existing road at Ekpoma. Mothercat is presently doing repair work at Okpella.

“By the special grace of God, we will have better roads by Christmas if the contractors are encouraged with money.

Oweh insisted that work is going on the dualization project by the three different contractors but shied away from disclosing the total length of the kilometers that have been asphalted, almost seven years after the commencement of work, amidst fanfare.

After a careful survey of the road, an Auchi commercial bus driver acidly summed up: “We were very optimistic when Jonathan flagged off construction work on the road. Going by the extent and slow pace of work, after almost seven years, I guess it will take another 50 years to finish the dualization and by then we will all be gone.”

Political offices shouldn’t be exclusively for the rich —MUSWEN

Has The Pandemic Fueled Drug Abuse In The United States?