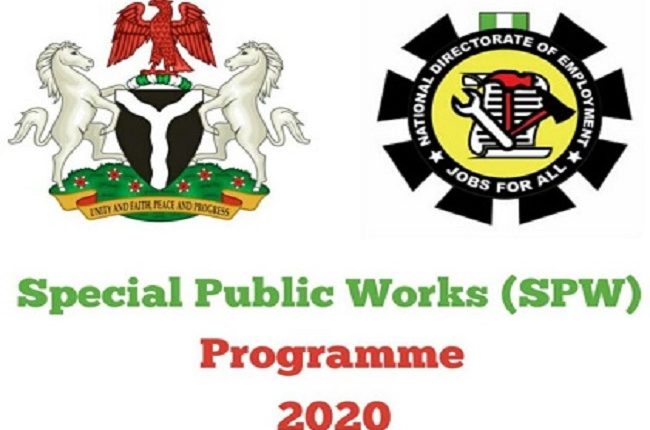 BENEFICIARIES of the Federal Government’s Extended Special Public Works Programme which has been formally kick-started across states of the federation have been implored to take advantage of the programme to improve their economic wellbeing.

The Muslim Media Watch Group of Nigeria (MMWG), which gave the admonition, also asked the beneficiaries to look beyond the allowances payable to them and go into other economic ventures.

In a statement by its Ogun State coordinator, Alhaji Kamaldeen Akintunde, the MMWG counseled the special public workers drawn from the 774 local government areas in the country against absenteeism, indolence, insubordination, laziness and other forms of indiscipline.

It admonished them not to see the allowances payable to them as their share of the ‘national cake’ but to justify the pay by being dutiful.

While commending the COVID-19 palliative programme, the group implored the state offices of the National Directorate of Employment (NDE) and the supervising local government authorities to provide the workers with appropriate tools, in addition to evolving proper mechanisms for the monitoring and evaluation of the programme.

As a reward for those who show commitment and dedication, it said such participants could be accorded recognition by giving them further consideration in subsequent opportunities or programmes.

The group noted that the participants’ workplaces would include public buildings, facilities, roads and infrastructures and therefore charged members of the public against molestation and ill treatment of the special workers and allow them to carry out their duties effectively.

The MMWGN canvassed for the inclusion of national monuments and worship centres like mosques and churches among public places where the special public workers will work.

It noted that such places are of significance to national life, saying their inclusion is not out of place.

The group also emphasised the need for the workers to adhere to COVID-19 precautionary measures.

It commended the Muhammadu Buhari-led Federal Government for the initiative, saying that it would go a long way in addressing the economic hardship and suffering caused by the Coronavirus pandemic.

It particularly commended the Minister of State for Labour, Employment and Productivity, Mr Festus Keyamo, whose doggedness, it said, saved the initiative from collapse.

The British Parliament at the Westminster Hall held a debate on ‘e-petition 554150, relating to Nigeria and the sanctions regime’ on Monday. The government of the United Kingdom has however responded…Beneficiaries of FG  Beneficiaries of FG

The surprise visit made on Friday night by the leaders of the ruling All Progressives Congress (APC) to former President Goodluck Jonathan at his residence in Abuja triggered a stir in the major political camps, resulting in at least four possible theories..Beneficiaries of FG  Beneficiaries of FG