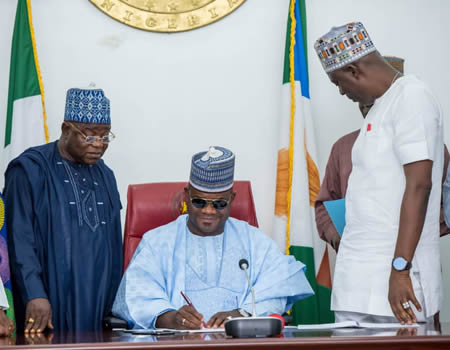 The event took place at the  Government House Lokoja, after the speaker, Matthew Kolawole, presented the approved budget to the Governor on behalf of other legislators.

The governor in his remark acknowledged that the signing of the budget was another milestone in the history of the State and another opportunity to bring about the dividends of democracy to the people.

The Governor lauded the legislative arm and its budget committee who facilitated a speedy passage and approval of the budget.

Bello, who appreciated the sacrifices of the lawmakers by resuming from their recess,  affirmed that the move was a sincere and commendable service to their people.

He further assured the citizens of the state that the implementation of the budget would be followed to detail, making sure that his administration consolidates on its past successes in delivering good governance to his people.

He, however, charged the people of the State, to go all out and vote peacefully in the Saturday election.

He stated that election was not a do or die affair, urging the citizens to be law-abiding before, during and after the electioneering process.

Governor Bello also charged the law enforcement agencies to be diligent in the performance of their duty, by ensuring that hoodlums with plans to disrupt the process were decisively dealt with.

While he called on law-abiding citizens to report any frivolous or criminal events to respective security agency, he assured of a successful outing for the All Progressive Congress at the polls.

The speaker had said that the 2019 budget was targeted towards ensuring that Government consolidated on its past achievements in the last three years.

The Speaker, however, advocated for the effective utilization of funds, by the respective Ministries, Departments and Agencies of Government for the purpose such has been approved.