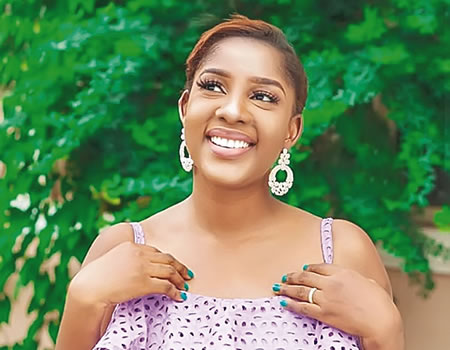 Oluwaseun Osigbesan is a popular face in ‘The Johnsons’, a sitcom that has been on the Africa Magic channel for more than 5 years. She acts as Jennifer; the first daughter of the Johnsons, in the TV series which got her nominated for best actress in a comedy in 2017. She shares with FAVOUR BOLUWADE her experiences in the movie industry, how demanding it has been for her but still finding her way to stand tall.

Tell us about yourself: background and education.

I am married with two children. I am from Ogun State – precisely, Ijebu Igbo but I grew up in Abeokuta and also had my primary and secondary school in Abeokuta while my tertiary education was at Olabisi Onabanjo University where I studied Performing Arts.

When did you start acting start?

My journey into acting started professionally in 2010 in Tunji Bamisigbin’s Kamsons & Neighbour, a family TV series. Later on I attended ‘Tinsel’ audition in 2011 through which I got on a new production, which was ‘The Johnsons’, in 2012.

How has it been generally especially being on the set of ‘The Johnsons’ for so many years?

It’s been good all the way. The experience on The Johnsons set has been humbling and I can’t trade it for anything.

Many don’t know you are a pastor’s wife, has there been anything you have done differently because of this?

Well, I am surprised to hear that many don’t know I am a pastor’s wife because I believe they do. For me, being in an industry like Nollywood doesn’t stop me from being who I really am in Christ.

Are there pressures you face in the industry? Can you share some of them and how you have sorted them out?

There’s pressure everywhere in the industry ‘to blow’ and live a luxurious life. A celebrity’s life style is a life of luxury and if you’re not living it, you’re not recognised in the industry. But for me, I try not to accept the pressure and be real with myself.

What’s your relationship like with your other members of the cast in the Johnsons?

My relationship with the cast of The Johnsons is very cordial. We are like a real family.

No doubt being on The Johnsons set has been very demanding but it doesn’t stop me from featuring in other movies.  I am presently working on featuring in more movies.

What other activities are you involved in?

I love speaking and writing.

Since the lockdown started, how has the production of the show been going?

Since the lockdown, production has been on hold and will sure resume when the tension subsides.

Do you wish you had done anything differently in your career or you are okay with the level now?

Well, I only wish I started out with movies rather than a TV series.

What do you love doing outside acting?

Asides acting, I love to organise conferences, especially for women.

What are you most grateful for in your career?

I am grateful for me being watched on TV five days in a week all over Africa and ‘The Johnsons’ gave me that opportunity. I’ve had fans comment under my posts on social media from different countries like Ghana, Zimbabwe, South Africa, Cameroon e.t.c, because of their love for the show. So I am really grateful for that.

What has been your most embarrassing ‘on set’ time?

My most embarrassing time on set was when I had to ‘kiss’ for the first time. It looked like all the crew members were present on set for unnecessary reasons and that made me more nervous. The scene took longer than expected because the director kept saying he wanted a smooth run. I just couldn’t wait for the scene to be over.

You acted with your kids in sitcom, tell us about it.

Yes I’ve had one of my kids play a role on ‘The Johnsons’. As a matter of fact, I filmed with a real pregnancy and my baby automatically joined the show when I had her. And she’s still on the show even as we speak. She plays the role of ‘Baby Science’.

Is the entertainment industry doing enough to sensitize viewers on the issues in our nation?

Well, I think leadership is the greatest problem we have in this nation. Every other issue springs out from the problem of leadership. And this is not something that one man can change; it is a collective effort of Nigerians at large. For me, I don’t think the entertainment industry is doing enough to sensitise the viewers on this issue. We rather play safe or shy away from them and this is taking us nowhere.

What narratives do you think should be changed and worked on in the movie industry?

One of the things I’d like to see change in the industry is how the cinemas take the larger share (60% to cinema/ 40% to film maker) of the profits from all movies shown in cinemas. There were days that Nollywood was ‘Home-video’ but now times have changed and Nollywood has gone to the cinemas and cinemas have taken advantage of this by robbing hard-working film makers of enjoying their reward just because the cinemas help in the distribution of the movie. I’d like to see that change. The cinemas should have the 40% and 60% to film makers.

Where do you see yourself in the next five years?

In the next five years, I see myself producing my own movies in view of having a production company later in future.

Your message of hope to Nigerians at this trying time?

I’ll like to say that there’s always light at the end of the tunnel. Nothing lasts forever. It will come to pass but in the mean time, let us all strictly adhere to the instructions of the government, by staying home to prevent the spread of the corona virus. We shall surely overcome.