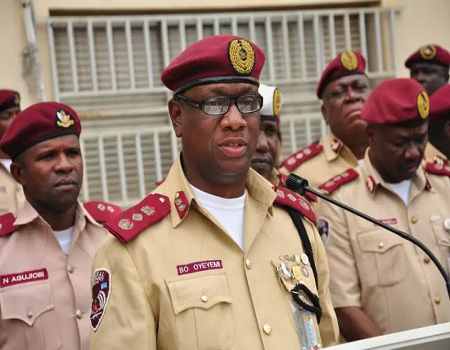 The zonal commander made this charge during a drill competition organized at the weekend for the FRSC personnel in the zone, which includes Sokoto, Kebbi and Zamfara states.

The drill exercise with participants drawn from the zonal headquarters and three sector commands under the zone was organised as part of the effort to enhance efficiency, as well as fitness among its personnel.

Olagunju stated this while speaking with the Corps underscored the exercise as a way of assessing the officers’ fitness, their respond to commands and level of their discipline.

According to him, “Drills like this enhance discipline as the guards are expected to respond to instruction uniformly and be able to display endurance of long hours standing.

“As a responsive organization, we regularly review the quarter guards and refill the performance of the guards to reflect on their level of discipline, fitness, endurance, and efficiency,” Olagunju explained.

The Commanding Officer said that aside from the laurels to be presented, the participants will also be enhanced in fitness, discipline as well as increasing their bonding as colleagues.

In his address, the chairman, Panel of Judges of the competition, DCC Markham Sambo while announcing the result said Sokoto (RS10.1) emerged as the overall winner in both Parade and Quarter Guard inspection.

Sambo disclosed that part of the criteria of the competition includes the participants’ neatness, accuracy, word of command and its timing, alertness of salutation and aliment of the contingent.