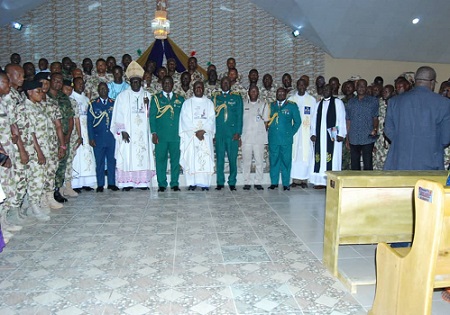 CHIEF of Army Staff, (COAS), Lieutenant General Tukur Yusuf Buratai has encouraged officers and men of the Nigerian Army to be spiritually sensitive in order to be professional in the discharge of their civic and constitutional duties of protecting the sovereignty of the country no matter what.

Tukur Burutai also reaffirmed his commitment and that of FG to improve the welfare and well-being of Nigerian Army personnel anywhere they are defending the national interest of the country.

The COAS made the commitment in Bauchi during the dedication ceremony of new Church auditorium and celebration of the sacrament of confirmation conducted at St. Peters Catholic Chaplaincy, Obienu Barracks of the Armour Corps Center in Bauchi.

Tukur Burutai who was represented at the occasion by the Commander Armoured Corps, Bauchi, Major General JO Akomolafe emphasised that welfare and training were the motivating factors for any military force, saying that the Army would continue to provide the best welfare for its officers and men to achieve the desired vision and mission of the Nigerian Army.

While urging the Armour community to continue to live in harmony and to pray for all troop at the field of operations, particularly Operation ‘LAFIYA DOLE’ the COAS called on Officers and Men of the Army to remain loyal by collaborating with other Security Agencies for the security of the country.

In his speech at the occasion, the Bishop of Bauchi Catholic Diocese, Most Rev Dr Hilary Nanman Dachelem expressed gratitude to the COAS for his visionary leadership towards re-professionalisation of the Nigerian Army and the level of spiritual upbringing which he said was worthy of emulation by all military personnel.

The Cleric also admonished the Armour community to continue to pray for the Nigerian Army and their families.

In his closing remarks, the Commander Armoured Corps, Bauchi, Major General JO Akomolafe described the commissioning ceremony as a historic event been the first under his leadership through the support of the COAS.

General Akomolafe was “thankful to the COAS for his continued support to the Armour community by his moral and spiritual guidance that led to the erection of the magnificent edifice in Obienu Barracks.”

He then encouraged the officers and men “to have an excellent maintenance culture so that the purpose of the edifice would stand the test of time” even as he urged all personnel to continue to pray for the COAS to achieve his vision in repositioning the Nigerian Army.

The high point of the event was the handover of the keys to the new church building to the Bishop of Bauchi Diocese, His Lordship Most Rev Dr Hilary Nanman Dachelem.

Thereafter, the representative of the COAS, Maj General JO Akomolafe unveiled the plague of the commissioning while the Catholic Bishop of Bauchi Diocese opened the doors signalling the commencement of activities in the new church building.

Old trucks on Nigerian roads must be changed ― FRSC