Be law-abiding in the face of COVID-19 pandemic, Buratai urges Bauchi residents 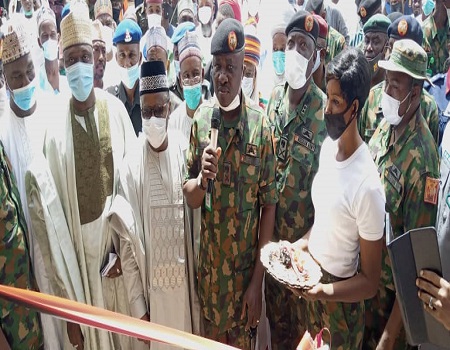 Residents of Bauchi State have been urged to remain law-abiding citizens of Nigeria particularly in this period of lockdown due to the global pandemic of COVID-19.

The call was made by the Chief of Army Staff (COAS), Lt General Tukur Yusuf Buratai who said that “You must all adhere to all safety rules as prescribed by the federal government and maintain good personal hygiene as regards to all measures to curb the spread of the virus bedevilling the world”.

The COAS was speaking on Wednesday, at the commissioning of two blocks of two classrooms constructed by the Nigerian Army at Kili Primary School in Darazo Local government area of Bauchi State just as it also renovated two other blocks of classrooms at the school saying that the intervention was aimed at improving education in the state.

He further said that the projects executed in the community included the construction and renovation of two blocks of two classrooms, stores, offices and toilets, the sinking of a borehole with the water adequately reticulated to the entire community as well as two culverts and drainage system constructed to enable easy access and effective channelling of water to tackle the problem of erosion in the area.

Tukur Buratai also said that the gesture marked a turning point for the Kili community as it will afford their children of the opportunity of learning in a conducive atmosphere pointing out that, “Before now, Kili Primary school was in a state of disrepair as well as the problem of the unavailability of potable water, toilet facilities, playground and lack of perimeter fence, to mention but a few”.

He added that, “This really affected the conducive atmosphere for learning by the pupils as most of the classes were being conducted under the trees, thereby making assimilation difficult for pupils”.

He expressed optimism that, “However, the construction of the new classrooms and the renovation of the old blocks of classrooms, as well as their furnishing, will ameliorate in no small measure, the challenges experienced in the past” .

The Army Chief further said that the projects were carried out as part of the Nigerian Army’s corporate social responsibility aimed at supporting the efforts of States and Federal Governments at improving the standard of education in Darazo local government area of Bauchi State and the country at large.

He also commended the Bauchi state government for the support to these units and formations in the state saying that the relationship is very cordial and important for harmonious coexistence.

Bauchi State Governor, Sen Bala Mohammed Abdulkadir in his speech, commended the Nigerian Army for its intervention in the education sector saying that it was very timely explaining that it came at a time the state government was striving to improve education in the state.

Represented by the Chief of Staff, Government House, Dr Ladsn Salihu, the Governor described General Tukur Buratai as the “finest example of not only philanthropy but also the kind-heartedness of a man in uniform to a civilian population.”

Bala Mohammed added that: “It also conveys his (Buratai’s) concern for the education of the younger ones, and he has provided a means of livelihood for thousands that will be educated through the four walls of this modestly furnished and renovated school”.

He added that, “The Chief of Army Staff is, at this point, grappling with the issues of insecurity on the North-East confronting head-on, the issues of Boko Haram and defeating them. Even in the midst of conflict, even the theatre of warfare, he has time to reflect on the needs of children, on the needs of a community and the need to get these children educated.”

The Governor then said that within one year of his administration through the State Universal Basic Education Board, (SUBEB) over 230 blocks of classrooms were newly constructed while over 400 were completely renovated and furnished.

Leaders of the community were full of appreciation to the Nigerian Army and particularly the COAS for finding them worthy of the project saying that it will motivate them to send more of their children to school.

NNPC warns against ‘padded’ cost of production by oil companies

Petrol/electricity price hike: Prepare for unprecedented mass action from next…