#BBNaija2019EntertainmentRazzmatazz
By Segun Adebayo On Oct 6, 2019 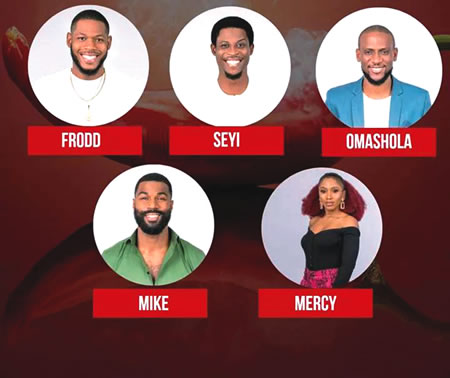 After 98 days, 21 evictions and one disqualification, the Big Brother Naija Pepper Dem Season will finally come to an end today.

But that the show, which has thrown up many twists and surprises in the last few months, would finally reward one of the last five standing housemates with the sum of N60 million worth of cash and gift.

Tagged Pepper Dem Season, this year’s edition of the show was sponsored mostly by online betting giant, Bet9ja and from the very first day in the house, Big Brother Naija did not fail to serve the housemates some ‘peppery moments.’

With just a few hours to when the winner is announced, the final five contestants: Omashola, Seyi, Mercy, Frood and Mike are already looking forward to what the night might bring. Their fate would now be decided by how the viewers vote.

No scheming or games or strategy can change their fate as voting ended about 24 hours ago and from the look of things, an uneasy calm appeared to be pervading the atmosphere inside the Big Brother Naija House.

After the sudden disqualification of Tacha, who could have given other contestants a big run for their money up till the last minute in the house, the coast became clear for the last six housemates, but Big Brother Naija came up with another twist that would later consume Diane with a surprise eviction from the show with just a week to go. This development reduced the number of housemates to five.

As the final countdown begins, R took a sneak into how the winner might emerge tonight.

From Frood, who came into the house with an open mind, but soon fell in love with Esther, now evicted, it seems the young man has moved on from the breakup occasioned by Esther’s eviction. He has since emerged as a major contender for the big prize. One thing that has worked for Frood till today is his determination.

Seyi, young, classy and resourceful, the Ikenne, Ogun State-born entertainer wormed his way into hearts with his voice and mannerism, one that was recognised by his fellow housemates. Seyi won the head of house challenge for a recordtime and would walk into the final day as the head of house. Sucre Papito as he’s fondly called, the young man has remained resilient and today might just be his day.

Omashola, the Warri, Delta State boy came into the Pepper Dem House game with his well thought-out plans. Though it took him many weeks before he could convince the viewers that he was in the game for the real deal, he remained a lively person in the house and never stopped thrilling with his usual mantra ‘Warri’ anytime he completes or wins a task. Not many people gave him the chance to be in the final, but the South Africa based model has found his way to the last day.

Mike, the model came into the house just weeks after getting married to his long-time lover. At a time when he was supposed to be on a honeymoon with his wife, Mike decided to embrace the limelight by giving a celebrity life a shot with the blessing of his wife. Now that he has emerged as a finalist, he would wish that he wins the big money and join his wife for a proper honeymoon.

The last on the list is Mercy. From the very first day, the light-skinned lady showed her many sides. Her friendship with Ike, one of the housemates evicted towards the end of the show, came with different chapters of fights, arguments and reconciliations. After the eviction of Ike, Mercy switched things up and faced the game with a focused mindset. Being the only woman standing after the disqualification of Tacha, whom she got into a fight with, Mercy is forging ahead to the last minute of the game with the impression that a woman could finally be crowned the winner of the Big Brother Naija show for the first time.