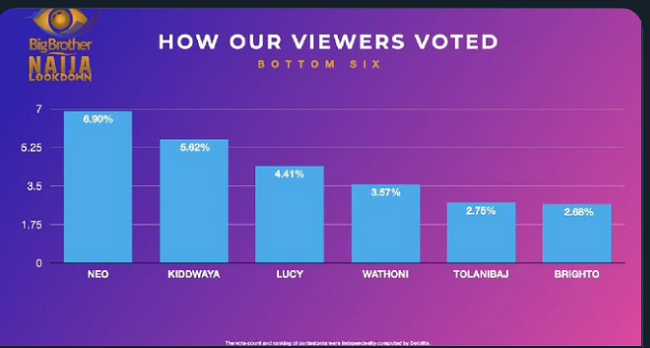 When the organisers of the Big Brother Naija Show announced that there was going to be a shakeup in Big Brother House prior to tonight’s eviction show, the viewers never saw the triple eviction coming.

Tolanibaj was first to be announced evicted by the host – Ebuka Obi-Uchendu, while Wathoni was also evicted thereafter. However, what looked more like the shocker on the eviction show tonight was a third eviction which saw another housemate, Brighto evicted from the show.

Nicknamed the ‘Lord Belish’ of this season by the viewers, Brighto ranked lowest on the bottom six result released by the organisers, followed by Tolanibaj then Wathoni ranked third lowest on the log.

The remaining housemates were left in a shocking moment as they saw not one or two, but three of their fellow housemates leave the house at once when the show still has at least four weeks left to end.

The Big Brother Naija Lockdown season has reached Week-six and according to the organisers, will end on the 27th of September with one of the housemates going home with the grand prize of 85 million naira.