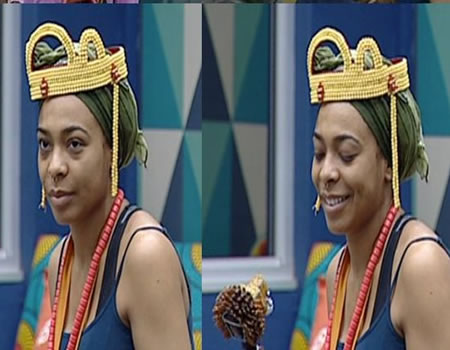 Tboss, one of the housemates of the on-going Big Brother Nigeria (#BBNaija) TV reality show on Thursday was `crowned’ the new head of house (HoH) for a day.

She was crowned by Marvis, who got the crown on Wednesday as part of the new rule by “Biggie”” owner of the house stating that all the housemates take turns to wear the crown this week.

Tboss’ crowning comes after a “fight’’ with her ally, Debbie-Rise over her (TBoss) inability to sing the National Anthem during a truth or dare game on Wednesday night.

DebbieRise was the first housemate to benefit from the crown rotation when she was chosen as Head of House by Bisola on Tuesday.

Tboss had expressed her sadness last week after the Head of House task over her inability to win any arena game or task since the show started.

She has come under heavy scrutiny from the public since her involvement in the disqualification of former housemate, Kemen who was accused of sexually assaulting her.

Tboss who has been up for eviction four times has proven to be one of the most emotional housemates as she breaks down in tears at any slight provocation.

The Head of House crown will continue to rotate round the remaining five housemates till the show ends on Sunday, April 9, 2017.

The top five housemates competing for the grand prize of N25 million and a Kia Sorrento SUV are Bisola, Efe, Marvis, Debbie-Rise and TBoss.