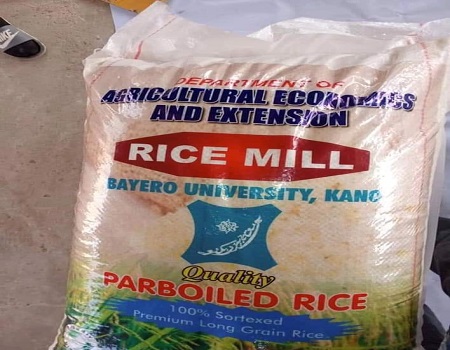 Bayero University, Kano (BUK) in an effort to contribute its quota on alleviating the demand for rice has commenced production of parboiled rice to meet the demand of both the university community as well as the general public.

Report states that the federal government’s ban on rice importation and subsequent closure of land borders has triggered installations of numerous rice mills across the country, hence boosting massive production of home-grown rice.

In an exclusive interview with the head of Agricultural Economics and Extension at BUK, Ali Abdullahi, he stated that the university’s rice mill has a capacity of processing one ton per day.

He further disclosed that recently, they produced 500 bags of rice in three days for a local contractor.

Mr Abdullahi, however, disclosed that by January 2020 the rice would be available at the open markets, as the current production rate has surpassed the consumption level of the university community.

He said the department has trained hundreds of youths from Kano and Kogi states on rice value chain.

According to him, this initiative, he said, may likely end the gap between ‘gown and town’ where academic research and project were being kept in universities to the detriment of the larger society.

Bayero University’s department of Agricultural Economics and Extension is among the first three Pioneer departments at the Faculty of Agriculture which was established in August 2001.

The department teaches courses and carries out research work in agricultural economics and extension especially as it relates to sustainable and profitable Agriculture in the Sudano-Sahelian ecological region.

COVID-19: We are not returning FG’s rice ― Ekiti government