Bayelsa’s twist of fate: The winners, the losers

•How Oshiomhole, Sylva, Tompolo lost out in South-South power game 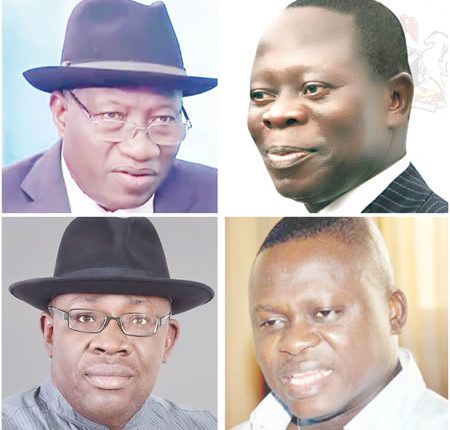 ON Thursday, the Supreme Court aborted the dream of David Lyon, the All Progressives Congress (APC) candidate in last November governorship election in Bayelsa State. His running mate, Biobarakuma Degi-Eremienyo, was his albatross.

The apex court consequently voided the Certificate of Return earlier issued to Lyon and directed the electoral umpire to issue a fresh certificate to the candidate of the party with the next highest votes and with the required constitutional spread of votes in the results of the election.

Despite the grandstand of the apparently ruffled  national chairman of the All Progressives Congress (APC), Comrade Adams Oshiomhole, who vowed that no party and candidate met the constitutional requirement of highest number of lawful votes and geographical spread with threat that the exalted seat of governor of Bayelsa State would remain vacant, the ‘’logjam’’ was eventually resolved in favour of the candidate of the main opposition party, the Peoples Democratic Party, Senator Douye Diri.

As the nation waited with bated breath, national chairman of the Independent National Electoral Commission INEC, Professor Mahmoud Yakubu, doused the tension as he declared at a media briefing at the commission’s headquarters that Senator Diri was the new governor- elect of the oil-rich state.

Yakubu disclosed that the PDP candidate and governor-elect, Senator Diri, scored the highest number of lawful votes and scored more than 25 per cent of the lawful votes cast in all the eight (8) local government reas of the state.

Voiding the votes scored by the candidate of the APC, David Lyon, Professor Yakubu gave the  total number of lawful and valid votes in the election as 146, 999.  He further noted that the PDP candidate scored the highest number of lawful votes which he gave as 143,172 to meet the constitutional requirements.

This development has, however, altered the political calculation in Bayelsa State, with emerging power brokers before Thursday pronouncement by the Supreme Court now dethroned.

Sunday Tribune examines the winners and losers of the judicial pronouncement in Bayelsa which has since thrown up Senator Diri as the man of the moment in the South-South state.

Before Thursday’s pronouncement by the Justice Mary Odili-led five member panel which jolted the ruling party, it had lost four of the states in its grip: Bauchi, Adamawa, Oyo and Zamfara—- the last equally to the pronouncement of the same apex court which voided its victory as it declared that its candidates in the last general election were ineligible since they were products of invalid primaries.

For Oshiomhole, the victory of APC in Bayelsa, incidentally his geopolitical zone, was a soothing balm. The APC chairman and the Deputy Senate President, Ovie Omo-Agege, recently pronounced the leader of the party in the zone  have  continued to boast that with its victory in Bayelsa, the party was determined to take over the oil-rich states and supplant the PDP in the South-South.

That boast has been short-lived with the judgment of the Supreme Court.

Other power brokers unsettled by the change in baton in Bayelsa were the duo of former governor of the state and incumbent Minister of State for Petroleum, Timipre Sylva and militant commander of the Movement for the Emancipation of the Niger Delta, Government Ekpemupolo otherwise known as Tompolo.

Sunday Tribune checks revealed that the 49-year-old MEND leader of Ijaw extraction from Delta State has assumed the role of power broker in his home state having produced the incumbent deputy governor, Kingsley Otuaro.

His deal with Timpire Sylva ensured that the Ijaw militants lined behind the APC candidate, David Lyon, in the last November governorship election. A PDP source argued that Tompolo’s alliance with Sylva was a big upset for the likes of Seriake Dickson as the MEND leader’s support for the  APC ahead  last November created a balance of terror in the camp of militants.

The Sunday Tribune source noted that Tompolo was a big asset to APC in the last election: ‘’His firm control of the ex- militants, especially in Southern Ijaw Local Government Area of Bayelsa State where Lyon hails from, was an advantage to the ruling party. He provided same support for Governor Dickson in the 2015 governorship election.”

Sylva, whose structure supplanted that of former Minister of State, Agriculture, Heineken Lokpobiri  and guaranteed  the APC ticket for David Lyon, has assumed the status of political godfather in Bayelsa until Thursday judgment of the apex court.

Has Jonathan lost out?

Aside his defeat in a presidential contest in 2015 as sitting president, another political  travails of former president, Dr Goodluck  Jonathan was his seeming humiliation by the immediate past Bayelsa governor, Seriake Dickson.

Despite appeals by the PDP stakeholders in Bayelsa and at the party national secretariat, Dickson refused to concede the ticket of deputy governor to Dr Jonathan and his home base of Ogbia. The former governor insisted on his choice of Lawrence  Ewrujakpor. The power tussle between Jonathan and Dickson eroded the PDP support base with power brokers from Ogbia led by Jonathan and King Turner showing indifference to campaigns led by Dickson.

Visit to Jonathan’s residence by APC leaders last November after David Lyon was declared winner by INEC fuelled speculation that he worked against his party.

Will he be sidelined in the government of Senator Diri? The governor and new party leader have since promised reconciliation with all aggrieved PDP chieftains towards ensuring a united political family.

Senator Diri gave the assurance shortly after picking his Certificate of Return at the INEC office on Friday.

Two top chieftains of the PDP, who have been at the receiving end of the defeat suffered by PDP in its strong base of Bayelsa, are Dickson and the national chairman of the party, Prince Uche Secondus. The former governor’s perceived insolence towards Dr Jonathan, his intransigence despite appeals and persuasions by concerned PDP leaders and alleged imposition of Senator Diri were identified as largely responsible for the party’s loss.

Fingers of scorn were pointed at Secondus for making himself pliable to the hijack of the party structure in Bayelsa, despite sustained protests by the likes of Timi Alaibe and other aggrieved aspirants.

Findings revealed that there was orchestrated plot to unseat the embattled national chairman of the main opposition party. With the turn of events, Dickson, who was already becoming a political pariah, may have retained his status as political godfather in Bayelsa and Secondus may survive the plot for his removal.

There is, however, an acid test before Dickson: those smarting to frustrate his plan to  emerge as  Senator to represent Bayelsa West (as replacement for Senator Lawrence  Ewrujakpor, now deputy governor) are unrelenting.

One of the aggrieved aspirants in the PDP, who may be a beneficiary of the new development in Bayelsa, is the former Managing Director of the Niger Delta Development Commission, Timi Alaibe.

The former Managing Director of the NDDC who claimed that the incumbent governor, Seriake Dickson, manipulated the party primary in favour of his anointed candidate, Douye Diri, had filed a suit to challenge the outcome of the primary won by the latter.

In the suit, he is asking the court to examine the entire processes that resulted in the primaries and rule in his favour, even as he claimed that the party’s guidelines were observed in the breach in “a desperate move to impose a pre-determined hand-picked candidate on the people out of 21 aspirants.”

To placate Dr Alaibe, speculation is rife that concerned PDP stakeholders are appealing to him to withdraw his suit with the ticket of the seat of Bayelsa Central senatorial slot vacated by the governor-elect, Senator Diri to be placed on his laps.

But a PDP source argued that such an arrangement is not cast in iron since Senator Diri and Timi Alaibe are from the same Kolokuma Opokuma Local Government Area of the state.

The source queried: “How do you convince other local councils in the same Bayelsa central to allow governor and senator come from the same local government?

Like Timi Alaibe, Governor  Douye Diri is from Kolokuma Opokuma Local Government Area in the Central Senatorial District of the state. If Alaibe is compensated with the senatorial ticket, it means both the governor and the senator are likely to come from same local government area. Will Yenagoa and Southern Ijaw Local Goverment Areas agree?’’

Bayelsa’s identity theft, Douye Diri and our gene of fraud