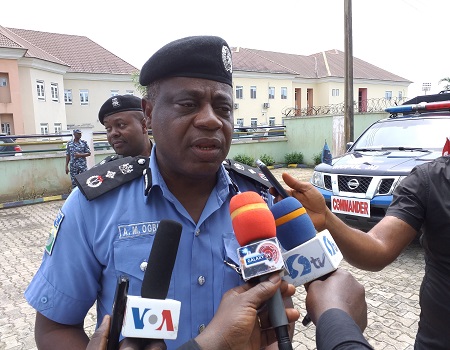 The Bayelsa State Police Command has vowed to apprehend suspected militants who killed a police officer and injured two at Nembe Local Government Area of the state during a political rally on Wednesday.

Deputy Inspector General of Police in charge of Saturday Bayelsa State Election, Anthony Ogbizi, made the disclosure while fielding questions from journalists at the Police Officers Mess, Yenagoa, on Friday.

Ogbizi, who regretted the killing of one person during the Nembe mayhem urged the electorate to exercise their franchise come Saturday.

“What happened in Nembe is unfortunate because these are police officers who planned to go for their primary assignment of ensuring that the election process is conducted free and fair and they were attacked by militants, but that is a statement we’ve taken care of and justice will be done.

“Nembe area is no longer a no-go-area. You are here and you are used to militancy. I will only advise that, that doesn’t pay.

“Killing their fellow brothers is not the option. Whoever wins is still an Ijaw, is still a Bayelsan so why are they taking up arms against themselves?

“And then why are you taking up arms against peace officers who are here to di their work?

“But notwithstanding, you can see the massive deployment that is going on and is complete.

“Every area we have deployed security agents to ensure that enabling environment is provided.

Every Bayelsan is assured of his security. They should not be afraid, but come out and cast their votes. And I want to advise that after casting their votes, they should go back to their respective homes and wait for the outcome of the election,” he admonished.

It will be recalled that one security personnel was reportedly shot dead and two sustained injuries while several vehicles were burnt during the mayhem that engulfed a campaign rally at Nembe on Wednesday.