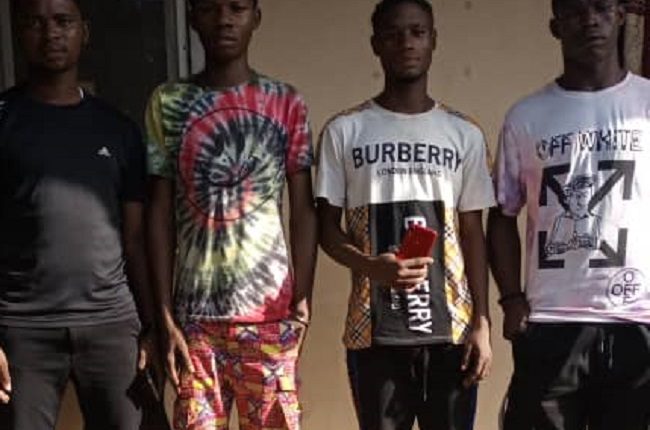 The Bayelsa State Vigilante Security Service led by its Chairman, Hon. Doubiye Alagba, over the weekend, arrested four suspects, including a popular phone repairer, for buying a phone that was allegedly stolen at gunpoint in Yenagoa.

Alagba, in a statement made available to newsmen in Yenagoa, gave the names of the suspects as Audu John, Dominic Diezibe, James Believe and David Emmanuel.

Acting on a tip-off that one Mr. Lawrence Oworodo was robbed of his phone and belonging at gunpoint, the vigilante authority traced the mobile phone to Audu John in Biogbolo district of the state capital.

According to the vigilante chairman, Audu gave useful information that led to the arrest of the other suspects and subsequently handed them over to the Nigeria Police for further investigation and prosecution.

Narrating how they where arrested, Alagba said “we picked interest in this case because the owner of the phone was robbed at gunpoint. One of the challenges we face in the streets of Yenagoa today is pocket crime.

“I call it pocket crime because these criminals go about with these locally made pistols to steal valuables from innocent citizens who go about their normal daily hustles.

“These four suspects were arrested through the help of a phone tracking device. The phone was tracked to one Audu John, who resides at Biogbolo, Yenagoa, who led us to the arrest of others including a popular phone repairer in Amarata, Mr David Emmanuel.

“I am using this medium to call on members of the public to wary of the phones they buy in the name of ‘London used phone’, investigations and cases of phone snatching we have handled where bought through this means.

“We have handed them over to Bayelsa Command of Criminal Investigation Department, Nigeria Police force, for further investigations.”