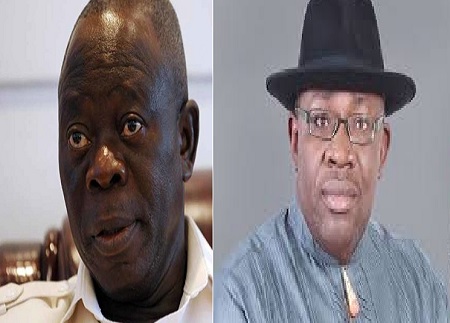 The ruling All Progressives Congress (APC) has told the outgoing governor of Bayelsa state, Hon. Seriake Dickson, to leave it out of the failure of the Peoples Democratic Party (PDP), Senator Douye Diri, in the just-concluded November 16th governorship election.

Reacting to an alarm raised by Dickson that the Federal Government connived with Independent National Electoral Commission (INEC) used security agents to rig the election, the state APC chairman, Mr Jothan Amos said the PDP lost the election because it fielded an unpopular candidate for the election.

In a statement on Tuesday, Mr Jothan said instead of preparing how to pay off the backlog of salaries and pension he owes civil servants and pensioners, Dickson has continued to display his arrogance and total disrespect he has for the people and elders of the state.

According to him, the APC won the election free and fair because they got the support of the people who were obviously tired of the tyrannical style of governance Dickson subjected them to in the last eight years.

He urged Bayelsans to ignore the comments of Dickson and remain steadfast, as the APC is more focused on drafting better policies and programs that would improve the lives of the people and the socio-economic development of the state for good.

He said: “The PDP lost the election because of the attitude of Dickson. The manner he insults and disrespects the people of the state, especially elders, is unprecedented. He has insulted everybody in Bayelsa, including the former president of Nigeria, Dr Goodluck Jonathan.

“If Dickson has insulted the likes of Dr Goodluck who picked him from nowhere and made him governor, then nobody should be surprised that he is bracingly accusing the Presidency and the INEC of complicity when he knows that the right thing to do at this point is to head to the Election Petition Tribunal if at all he has a case.

“What happened in the just concluded election was the manifestation of the will of the people who wanted to be liberated from the bondage Dickson subjected the to. They simply expressed the fact that they were tired of darkness, underdevelopment, non-payment of salaries, too many abandoned projects, dilapidated schools, insecurity and misappropriation of public funds.

“The people expressed their disappointment in the PDP led government at the polls, this was done without any form of financial inducements. If at all Dickson has learnt to receive wise cancel, I would suggest he rather start offsetting the many debts he owes Bayelsa civil servants and not to continue to make comments that would bridge the existing peace Bayelsans currently enjoy.

“He should start preparing his hand-over note because the battle is lost. In spite of the fact that he has failed to congratulate our governor-elect, Chief David Lyon, the people are happy about the way the election turned out. Go to the streets of Yenagoa, you would see people celebrating the victory of our party. And the APC is more focused on how to bring the needed change the people desire, and not to pay attention to hate speeches of Dickson.”

How Presidency traced ex-cleaner who returned millions of dollars