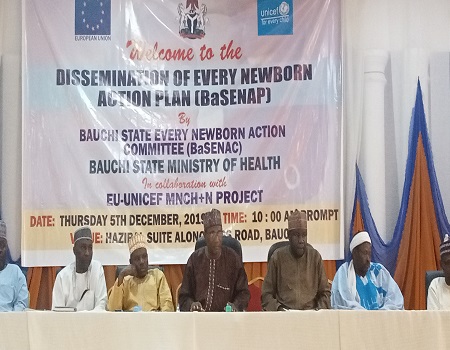 While speaking during the unveiling of the action plan on Thursday at the Hazibal Hotel and Suites, the Commissioner for Health, Auwal Jatau commended the initiative saying that it will definitely go a long way in managing the rate of infant morbidity and maternal mortality through constant information dissemination.

The Commissioner who was represented by the Permanent Secretary of the Ministry, Dr Bako Mohammed said that the committee is supported by the Ministry of Health, in collaboration with the  EU-UNICEF Maternal, New-born, Child Health  & Nutrition project (MNCHN).

He called on the partners to the program to ensure that they do the needful to see that the program succeeds in order to safeguard the lives of the newborn due to their fragility and open to disease attacks.

The Commissioner also lamented that Bauchi state is contributing negatively to the National Demographic situation, a development he charged the participants to seek positive ways to check and correct.

Auwal Jatau then assured that his Ministry is ever ready to support the Committee in whatever way necessary because according to him, the goal is to ensure that the PDP led administration in the state succeeded in improving the health sector to an enviable level knowing full well that health is wealth.

In their various goodwill messages, representatives of health-related organisations, as well as leaders of religious organisations, agreed that something urgent needs to be done in order to check the high rate of infant morbidity and maternal mortality in the state.

They all promised to cooperate and support the BaSENAC to enable it to succeed in effective dissemination of the action plan as contained in the document unveiled.