Plans to construct 12 new ones 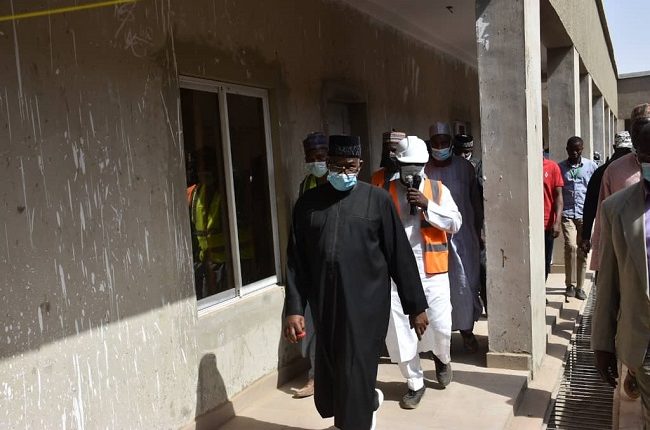 In its resolve to promote, develop and upgrade the standard and quality of the education sector Bauchi state government is to construct 12 new secondary schools across the three senatorial districts of the state just as it spent the sum of N350m for the renovation of Government Secondary School, Katagum mai Kaba.

The disclosure was made by the State Governor, Sen Bala Mohammed Abdulkadir while inspecting the 40-year old dilapidated Secondary School now completely renovated in Katagum, headquarters of Zaki Local Government Area of the state during his projects inspection tour on Tuesday.

The governor said that already 12 other secondary schools are being completely rehabilitated and renovated having experienced years of neglect and dilapidation making students to learning in an unconducive environment.

He recalled that the Government Secondary School, Katagum was constructed by the first civilian Governor of the state, late Abubakar Tatari Ali in 1981, disclosing that the government spent the sum of N350 million in renovating the school.

Bala Mohammed said that, “I must commend the first civilian governor of the state, Late Abubakar Tatari Ali for the various legacy projects he executed in various parts of Bauchi state during his tenure, he is a leader worthy of emulation. Education is the pillar of any development project which my administration has accorded priority for the future leaders in the state”

The governor added that, “The state has the highest number of out of school children and dilapidated structures in schools.We are changing the narratives by giving priority to education, that why we are here today, to ensure school structures are rebuilt and our children will go back to school”

He also said that his administration is committed to changing the negative education narrative in the state assuring that by the time his tenure was completed, the education sector will have been turned around positive.

The Governor then advised the students to be more serious with their studies so that they will become the leaders of tomorrow stressing that without quality education, they will not get to the places they are eyeing.

Meanwhile, Bauchi State Governor, Sen Bala Mohammed Abdulkadir has declared that the only difference between the President, Muhammadu Buhari and himself is different political party affiliation saying, “he belongs to the APC while I am of the PDP”.

Bala Mohammed said that, “it was the same people who voted for Muhammadu Buhari in the 2019 general election that voted for me as the Governor of Bauchi State. You can see that we are one aside from the political party differences between us”.

The Governor made the declaration Sunday evening while inspecting ongoing projects across the state saying, “President Muhammadu Buhari and myself are working hands in hands for the good of the people of the state”.

He added that, “it is a joint project with the Federal Government which when completed and allocated to the people, will open up Bauchi State particularly the state capital. Anybody coming in from Jos will see the beauty of Bauchi from this point. We are indeed very grateful to President Muhammadu Buhari for the gesture “.

The Governor assured that the project will be completed as scheduled but said that government is looking at how the contractors will not run at a loss considering the sudden astronomical rise in the price of building materials promising however that the situation will not in any way affect the price of the units when completed.

He told the people that recreation centre will be provided in the estate as well as schools, market, Police post, access roads as well as other amenities that will make life comfortable in the estate.

At the Ningi site of the housing units, the Governor assured that government will ensure that only those people who are qualified will be allocated the houses because according to him, the aim is to provide homes to those who are living in rented apartments.

The Governor also inspected the 13.5km Katanga Warji – Gwaram road that will link Bauchi state with neighbouring Jigawa state and open up the area particularly in the area of Agriculture.

At the Special School for Girls in Kafin Madaki, the Governor assured the students of adequate security in the face of the security challenges in the country advising them to settle down and face their academic activities squarely.