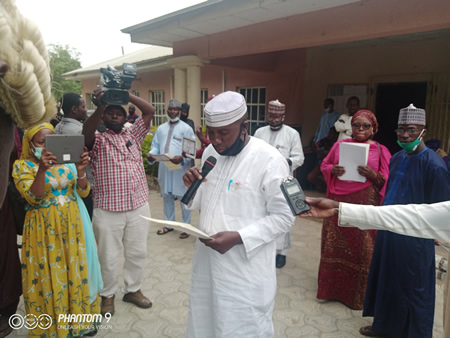 Speaker of the Bauchi State House of Assembly, Abubakar Y Suleiman has congratulated Umar Sa’idu on his election as Chairman of the Nigeria Union of Journalists (NUJ), Bauchi State Council held on Saturday.

The speaker who also congratulated other officials of the Union elected today said he has no iota of doubt that members of the NUJ Bauchi State council have made the best choice of a leader, knowing fully who Umar Sa’id is and his wealth of experience as a journalist as contained in a statement by Abdul Ahmad Burra, spokesperson to the speaker, Bauchi State House of Assembly.

Abubakar Suleiman charged the new leadership to partner with both Executive and Legislative arms of government in delivering dividends of democracy to the people of the State, being the watchdog of the society.

The speaker stated that “You should portray the good image of Bauchi State to the world through your reportorial responsibilities by disseminating accurate, factual and positive information about Bauchi State”.

“Bauchi State House of Assembly under my leadership is a media-friendly. Thus, I urge you to continue helping us in discharging our legislative responsibilities by promptly reporting our activities. This will encourage us and our constituents and will strengthen democracy. My door will remain wide open for all journalists.” He said.

The speaker also charged the NUJ leadership to ensure professionalism by making sure the ethics of journalism and respect for the laws of the Country are the watchwords of every journalist in the State.

He further reminded the leaders on the urgent need to device means to curb the spread of fake, hate and dangerous news especially on social media which is causing monumental damage to the stability and progress of the State and the Country in general.

He concluded that “Social media is a reality we must live with despite the fact that some people are misusing it to spread hatred, fake and dangerous news. I challenge you to face these problems with all seriousness so that some sanity and ethical standards will be maintained in all media platforms including social media”.