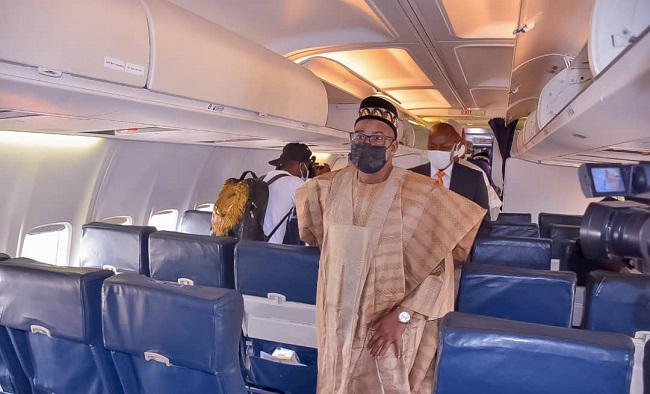 Bauchi State Governor, Sen Bala Mohammed Abdulkadir, has reiterated the determination of his administration to open up the state and make it the business hub of the North-East subregion in the nearest future.

The Governor who was speaking at the commencement of flight operations into Bauchi by Aero Contractors airline said that the state has natural resources that can attract investors describing the famous Yankari Resort and Safari as a place that needs to be visited by Nigerians who want to enjoy hospitality and tourism.

Bala Mohammed who received the inaugural flight of the airline into Bauchi from Abuja at about 10.06 am on Wednesday at the Sir Abubakar Tafawa Balewa International Airport, Bauchi said that the state is collaborating with the Ministry of Aviation to make the airport a cargo terminal.

According to him, “Bauchi is central and gateway to all the states in the North-East subregion, it is easily accessible to Adamawa, Borno, Taraba and Yobe states. It is also very close to Jigawa state, if we have the cargo terminal here, the business will rise.”

Bala Mohammed who was excited by the new development said; “with the coming of Aero airline, competition has been introduced into the industry. Let me inform you that this company approached us to come in unlike the one we had to persuaded to come.”

He then promised that government will support the airline in other to keep flying in and out of the state saying that, “if it means giving subsidy and other financial support, we will do just that to keep you on this route.”

Earlier, the Managing Director of Aero Airlines, Captain Abdullahi Mahmoud, assured that there will be regular flights in and out of Bauchi because according to him, the airline is in business to serve humanity.

Abdullahi Mahmood added that with time, the airline will increase the flight schedule in and out of Bauchi saying that the route is one of its resolve to open up the country’s aviation industry and boost economic development.

CLAIM: A website claims that the Tertiary Education Trust Fund (TETFund) is offering Nigerian students N20,000 grant. This is being sent to unsuspecting students as a bulk SMS with the name Tetfund2021.Bauchi reiterates commitment to opening up business avenues

UTME: Over 80% of registration problems caused by candidates ― JAMB