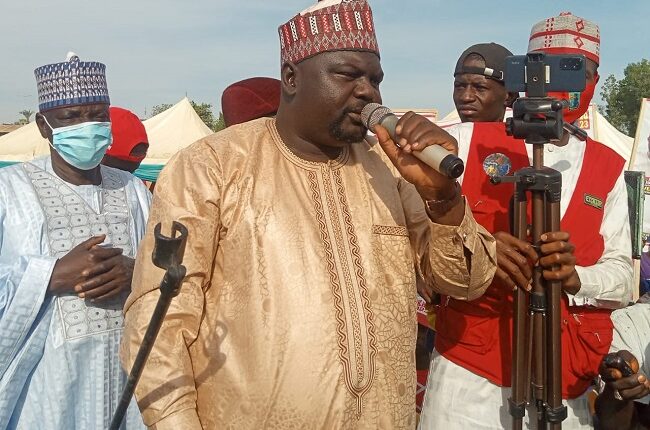 Share
The gubernatorial candidate of the New Nigeria Peoples Party (NNPP) in Bauchi State, Senator Halliru Dauda Jika has decried the habits by some political parties in the state for giving a measure of salt or N1, 000 to helpless electorates with the aim of buying their votes during 2023 general elections.
The candidate also warned youths and women to shun receiving such gifts for their votes but should ensure that they voted for credible candidates in polls to avoid mistakes of the past.
Haliru Jika, however, assured that the people of Bauchi State would soon be salvaged from the shackles of abject poverty, disease, and ignorance by his incoming administration after the 2023 polls.
He was speaking at a rally in Bauchi to receive some 50,000 defectors from nine different political parties in the state into the NNPP to boost his aspiration.
According to him, “Let me correct one thing that is going around in the social media that I am working for someone, they know me, and I am not a coward in politics, especially in Bauchi State politics where I was born”.
He stressed that “I am a bonafide son of the state, so don’t believe them with their mischievous talks that I am here for somebody, APC or PDP, rather I  am here to be the next governor of Bauchi state come 2023.”
The NNPP candidate further said that “Let me assure you, our government will deliver the yearning and aspiration of the Bauchi people, particularly youth and women because of the tremendous support we are witnessing since we started this journey.”
Haliru Jika also emphasized that “Let us meet at the battleground, they will know me very well, I am not afraid of anybody from their parties because they refused to do what is right for the people of Bauchi. We are here to change the narratives in Bauchi state, and Bauchi is for competent people not for a bunch of liars.”
Earlier, the Chairman of the New Nigeria Peoples Party (NNPP), Alhaji Sani Shehu said that the party is counting the numbered days of the incumbent Governor, Sen Bala Mohammed to relinquish power to the party’s candidate, Senator Halliru Dauda Jika.
Sani Shehu, popularly called Sanin Mallam, expressed optimism that the party’s candidate, Senator Halliru Jika will dethrone incumbent Governor Bala Mohammed from power at the 2023 poll.
Sanin Mallam described the Bauchi NNPP gubernatorial candidate as more youthful than the incumbent governor, saying the days of free distribution of goats as empowerment to youths and women by the present administration in Bauchi would soon be over.
Also speaking at the occasion, a member of the NNPP, Alhaji Baba Mallam Katagum called for 40-day prayers for the repose of some Bauchi deceased pensioners and civil servants who lost their lives while waiting for the payment of their entitlements and salaries respectively.

Baba Mallam decried the state of health service delivery in the state, arguing that hospitals and primary healthcare centers were turned into mere consulting facilities without the necessary drugs to administer to patients, saying the situation is extremely worrisome.
Mallam also accused Governor Bala Mohammed of self-centredness by allegedly building a mansion in Bauchi containing 70 rooms out of government coffers, querying “Where is he going with such a magnificent house when he already attained the age of 64 years”.
The defectors who were coordinators of other political parties crossed -over into the NNPP under the leadership of Alhaji Sani Alkaleri, the younger brother of Bauchi state governor’s Wife, Hajiya Aisha Bala Mohammed, Alhaji Suleiman Kirfi, Alhaji Isa Zakiru, Alhaji Baba Malaam Katagum.
Another defector, Alhaji Garba Chiroma who spoke on behalf of all defectors said that they were here for a purpose to get the right people in the helm of affairs of the state government.
According to him, “We are tired of this government we are not talking about this administration, they are not in our front, because they disappointed us, umbrella and broom we will not allow them to deceive Bauchi people again”.
“I urge Bauchi electorates to do the needful and elect all NNPP candidates in the 2023 general elections in the state, especially with women voters”, he stressed.
Different Stakeholders of the party spoke during the event urging the people to vote for NNPP at all levels, assuring that they will go round all the 20 local governments area of the state to canvass support for their Gubernatorial Candidate and other candidates of the party in general.