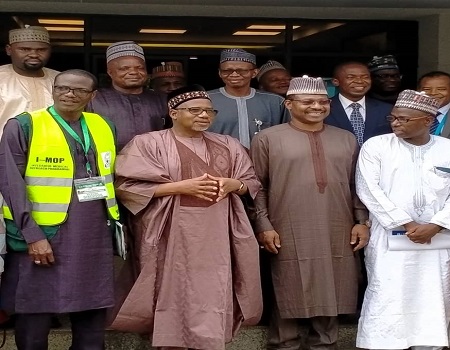 Bauchi State is to be included among the benefiting states of the Agro-Processing, Productivity Enhancement and Livelihood Improvement Support (APPEALS) Project which is an initiative of the federal government.

The disclosure was made by the Minister of Agriculture and Rural Development, Alhaji Muhammad Sabo Nanono when the State Governor, Sen Bala Abdulkadir Mohammed visited him in his office, Abuja.

The Minister said that the development is as a result of the commitment of the state government towards boosting agriculture thereby complementing the efforts of the federal government in developing the sector.

He added that Bauchi State is selected to benefit from the new projects of the ministry particularly, livestock development, milk processing plant, agricultural mechanization among others.

The Minister added that, ” I am aware of some of the policies introduced by the Bauchi State Government geared towards ensuring the advancement of agriculture in the state. With this Your Excellency, we will support by ensuring Bauchi joins other states that benefit from (APPEALS) project.”

Bala Mohammed had earlier said that the visit was to key into the agricultural transformation agenda of the federal government especially it’s current Agro-Processing, Productivity Enhancement and Livelihood Improvement Support (APPEALS) Project.

The Governor observed that if implemented in the state, the project will empower farmers in different capacities in addition to assisting him to provide citizens of the state with dividends of democracy.

According to him, the introduction to the project is a timely as his administration had developed it’s robust agricultural policy to overcome the challenges facing the sector and provide employment opportunities to unemployed youths and women in Bauchi state.

The Governor also said that, “We are ready to partner with you in that area, we are happy that the project was also based on gender equity. This is a welcome development as it will empower our local farmers and women folks.”

Bala Mohammed said that his administration will provide enabling environment for farmers to operate in the state as part of efforts to improve the Internally Generated Revenue of the state.

It will be recalled that, Agro-Processing, Productivity Enhancement and Livelihood Improvement Support (APPEALS) Project is a six-year project developed by Federal Ministry of Agriculture and Rural Development in collaboration with World Bank and other stakeholders.

The project is in line with the Green Alternative Agricultural Promotion Policy (APP) 2016-2020, which builds the legacy of the Agricultural Transformation Agenda (ATA) and plans to support quality thrust on food security, local production, job creation and economic diversifications.

It was also initiated to support the government’s new policy thrust and priorities for the new agricultural sector across all the three thematic areas of the APP, with the focus more on theme 1-Productivity. Enhancement.

The project is aligned with country partnership strategy (CPS) FY 14-17 and it’s focused on boosting agricultural productivity and improving farmers’ linkage with agro-processors.

States participating currently in the project include Cross River, Enugu, Kaduna, Kano, Kogi and Lagos while Bauchi State is expected to soon join them as pledged by the Honourable Minister of Agriculture and Rural Development, Alhaji Muhammad Sabo Nanono.