Force a girl, woman to marry, go to jail for 2 years in Bauchi-Magistrate declares 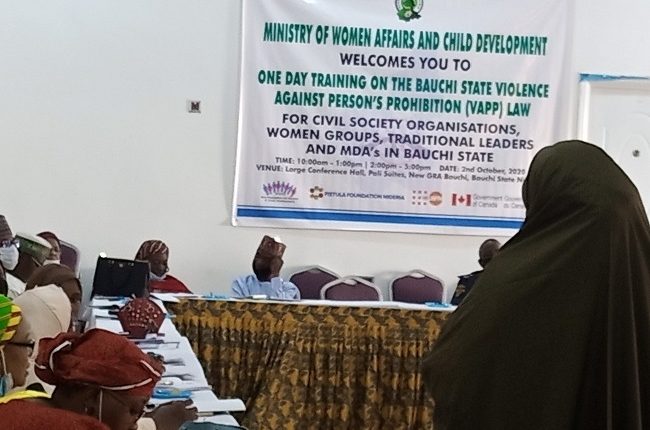 Henceforth in Bauchi State, anyone found guilty of forcing a girl or woman into marriage against her wish is liable to spend 2 years behind bars or pay the sum of N500, 000 as fine or both as the case may be.

The prohibition is contained in the recently enacted Violence Against Persons Prohibition (VAPP) law in Bauchi State, a section forbids forcing girls and women to unwanted marriages considering that they have human rights to be protected.

The disclosure was made by a Magistrate in the state, Amina Garuba who is the Chairperson, VAPP law working group in Bauchi State while presenting a lecture on the new law at a one-day training organised by the Bauchi State Ministry of Women Affairs for civil society organizations, women groups and traditional leaders at Pali Suites, Bauchi on Friday.

Amina Garuba also explained that the law provides for a 2 years imprisonment for any offender of the offence or a fine of N500, 000 or both when found guilty by the court.

She further stated that it is an offence for a partner to evict his spouse forcefully from their matrimonial home noting that the punishment for that is also a two years jail term or a fine of N300, 000 advising that the proper way must be followed to get a spouse out of the house after divorce.

According to her, the VAPP law which was passed to address violence against persons especially women penalizes rapists by life imprisonment or death by hanging in the case of rape of a minor on conviction.

Other proscribed acts provided by the VAPP law she listed include prohibition of female circumcision, forced financial dependence, economic abuse, forced isolation from family as well as an abandonment of spouse and children.

Earlier In her own address, the state commissioner, ministry of women affairs and child development, Hajara Gidado said that the law was passed into law by the state government to protect the human rights of all citizens.

The Commissioner who was represented by the Permanent Secretary of the ministry, Ahmed Shehu Lame assured that government was committed to the full implementation and enforcement of the law to check commitment of violence against persons vulnerable.

The Commissioner also said that the workshop was meant to educate the participants on the law so that they could pass the message to others.

As Nigeria celebrates its 60th Independence Anniversary, Most Reverend Emmanuel Adetoyese Badejo, the Bishop, Catholic Diocese of Oyo in his message on the occasion…Bauchi govt imposes two years

FACT CHECK: Holding breath for 10 seconds or more without coughing NOT COVID-19 test