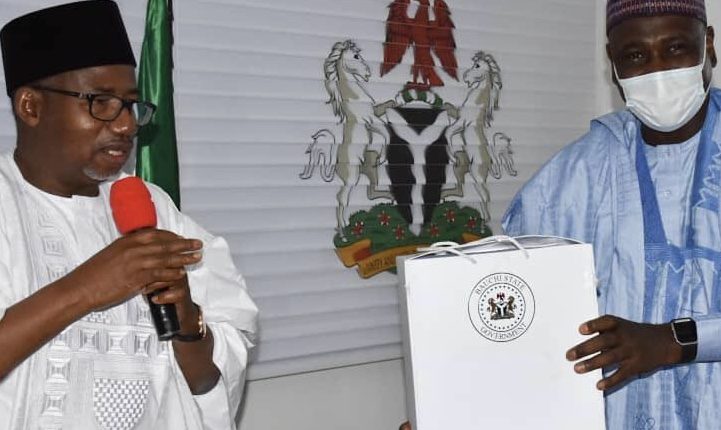 Share
In its resolve to ensure a clean and healthy environment that will promote good living, the sum of N40 million has been earmarked by the Bauchi State Government for the establishment of an Environmental Science Laboratory in the state.
The disclosure was made by the State Governor, Sen Bala Abdulkadir Mohammed when the Director General of the National Environmental Standards and Regulations Enforcement Agency, (NESREA), Professor Aliyu Jauro paid him an advocacy visit at the Government, House Bauchi late Friday evening.
Bala Mohammed said that the proposed Environmental Science Laboratory will serve as a centre for testing of environmental issues and welcomed partnership with the Agency for the smooth take off of the laboratory.
The Governor also said that his administration will use science and technology in tackling environmental challenges in the state in addition to the policy already developed on zero tolerance to environmental sanitation.

ALSO READ: Why are Investors Inclined towards Bitcoin Trading?

He said that, “On behalf of the Government and people of Bauchi state, we are very pleased to receive you today on this important visit because of the important we attached to environmental sustainability in Bauchi which is one of the Goals of SDGs.”

Bala Mohammed added that, “We are in the process of establishing our own environmental science laboratory in Bauchi state at the cost of about 40 million naira to serve as a centre for testing, I am very familiar with the importance of this NESREA having participated in the formulation of its creation.”
The Governor who declared total commitment and interest to work in active synergy with the Agency, said the state government will also focus on free disaster activities to mitigate the impact of flooding.
Earlier, the Director General of the National Environmental Standards and Regulations Enforcement Agency, (NESREA), Professor Aliyu Jauro said that building a viable partnership with the Bauchi State Government will benefit both NESREA and the state government, believing that, success stories from such partnerships can become a model which can be replicated in other states of the federation.
The Director General also said that the vision of the Agency is to ensure a cleaner and healthier environment for the all Nigerians while its mission is to inspire personal and collective responsibility in building an environmentally conscious society for the achievement of sustainable development in Nigeria.
Aliyu Jauro added that, “Let me seize this opportunity to heartily appreciate the State Government for deeming it necessary to provide an office accommodation to our Agency.  I want to assure you that this singular gesture has positioned the Agency to effectively discharge her duties in the state.
According to him, having recognized the seriousness of environmental problems in the past decade, the Nigerian Government has evolved steps in addressing them through institutional set-up and policy formulations as contained in a statement by Muktar Gidado, Senior Special Assistant on Media to the Governor.
NIGERIAN TRIBUNE
Share

Why are Investors Inclined towards Bitcoin Trading?