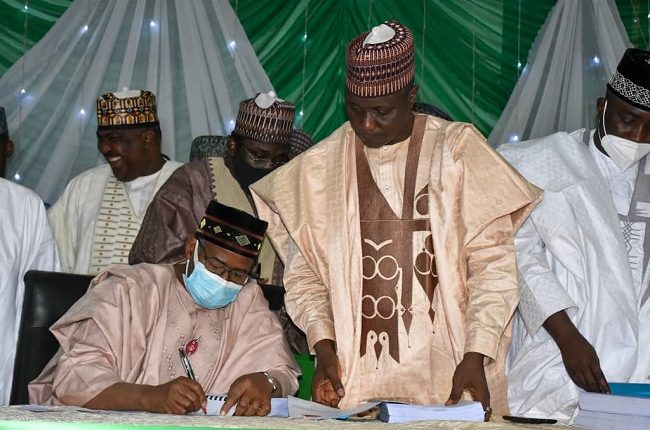 While signing the document during a ceremony held at the Banquet Hall late evening, at Government House, the Governor pledged to ensure full implementation of the approved 2021 budget.

He explained that the 2021 budget was larger than that of 2020, as it was designed to enable his administration to consolidate on the achievements so far recorded in the area of provision of social amenities to the people of the state.

Bala Mohammed also said that the ratio between the recurrent and capital expenditure is within the global best practice and assured that, the state government will look at the outcome of the budget to ensure every sector is affected.

He further said that the state government will expand the provision of projects across all the nooks and crannies of the state with the inputs of the lawmakers in the budget to ensure equity and justice.

Bala Mohammed added that “I wish to use this opportunity to thank members of the State House of Assembly for working round the clock and working very hard in synergy with the State Executive Council to pass the budget within ten days.”

He added that “I am always grateful to Almighty Allah for giving me the kind of members that I have in the State Assembly who recognised the fact that we are guided by the fear of Allah and by one common thing, that is the Bauchi project. The people who voted us into power.”

The Governor also said that the state government will continue to partner with the international community to leverage on sources of funding for effective implementation of policies and programmes geared towards the progress and development of the state.

While presenting the document to the Governor, The Speaker of the State House of Assembly, Abubakar Y. Suleiman said that the timely passage of the budget was not unconnected with the members’ commitment, patriotism, mutual cooperation and understanding that existing between the legislative and the executive arms in the state.

The Speaker who led principal officers of the House to present the approved budget to Governor Bala Mohammed for his assent hoped that 2021 would be fully implemented for the provision of social amenities to the citizenry.

The Speaker said: “Your Excellency, we are here today once again to present you the 2021 approved budget for your assent as required by the Constitution of the Federal Republic of Nigeria 1999 as amended.”

“I must at this juncture commend the cooperation and efforts exhibited by MDA’s and in particular the Ministry of budget and economic Planning which expedite the timely completion of the processes.”