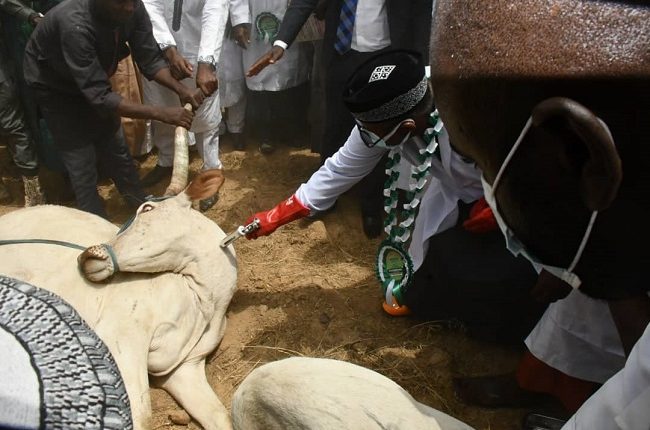 The sum of N32,147,500,000 has been approved and released by Bauchi State Government for the conduct of the 2021 annual livestock vaccination campaign in the state.

The disclosure was made on Wednesday by the Governor, Sen Bala Mohammed Abdulkadir who launched the campaign at Galambi Cattle Ranch, saying that the amount will cover vaccines, equipment and allowances of personnel recruited for the exercise.

According to him, livestock rearing not only brings income to the people but serves as a means of supplementing the protein requirements of the people as well as raw materials to industries.

He also said that his administration is aware of the significant contribution of the veterinary sub-sector in the area of public health, preventive medicine, food security and safety among others.

The Governor further said that the sub-sector has equally been playing a big role in the control of emerging diseases most of which are zoonotic in nature.

Bala Mohammed said that “I understand that the consistent and sustained vaccination of livestock against various diseases is a way of controlling and eliminating diseases which devastating impact on our livestock.”

“Because of the efforts of the Bauchi State Veterinary Department in the disease reporting, the World Health Organisation for Animal Health through the Federal Ministry of Agriculture and Rural Development (FMARD) Department of Veterinary and Pest Control donated 6,000 doses of Anti-rabies vaccines to Bauchi State,” he added.

The Governor added that in an effort to ensure maximum support to the veterinary profession, the state government decided to sustain the veterinary student’s manpower scheme inherited from the previous administration despite an embargo on employment.

He declared that “This Administration has been maintaining and supporting the State Agency for Nomadic Education with a view to educating our teeming nomadic population thereby improving livestock production in the state.”

The Governor also said that the state government has equally been collaborating with Federal Government on the full implementation of the National Livestock Transformation Programme to improve the livestock sub-sector of the economy, reduce poverty, create awareness and bring the nomadic Fulani closer to government.

He explained that “My Administration is aware of the activities of Fulani organisations in promoting peaceful coexistence in the state, promoting the interest and wellbeing of pastoralists, wealth creation and conflict mediation particularly in the state.”

The governor used the medium to commend professional bodies in complementing the efforts of his administration in the area of animal production health and general public health.

In a keynote address, the Chief Veterinary Officer of Nigeria, Dr Olaniran Alabi said that rabies is one of the priority trans-boundary animal diseases and has remained endemic in Nigeria since it was first reported in 1912 where some of the constraints in the control of the disease are that major of dogs are unlike, unvaccinated and allowed to roam freely in the communities.

He also said that rabies is a highly fatal viral disease affecting all warm-blooded animals and noted that, it was transmitted through the bite of an infected animal or man with 99 per cent fatality if efficient post-exposure prophylaxis is not instituted early.

Olaniran Alabi said that “I wish to especially appreciate His Excellency, the Executive Governor of Bauchi State, Senator Bala Abdulkadir for his continuous support and a keen interest in all veterinary and livestock activities in Bauchi state.”

On his part, the State Commissioner for Agriculture and Rural Development, Samaila Burga said that the state government has provided an enabling environment to enhance the production capacity of livestock farmers by tackling their challenges encountered in the process.

The Commissioner also said that 800,000 cattle, 1.2 million sheep and goats are expected to be vaccinated against rabies and other animal diseases in the 2021 livestock vaccination campaign which will last 30 days and cover all the 20 LGAs in the state.

The British Parliament at the Westminster Hall held a debate on ‘e-petition 554150, relating to Nigeria and the sanctions regime’ on Monday. The government of the United Kingdom has however responded…Bauchi govt approves  Bauchi govt approves

The surprise visit made on Friday night by the leaders of the ruling All Progressives Congress (APC) to former President Goodluck Jonathan at his residence in Abuja triggered a stir in the major political camps, resulting in at least four possible theories..Bauchi govt approves  Bauchi govt approves