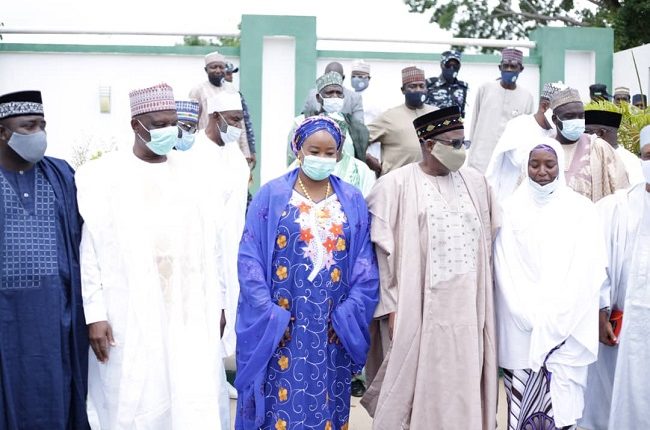 Bauchi State governor, Sen Bala Abdulkadir Mohammed has renewed his support to all political appointees working with him for effective discharge of their assigned responsibilities for the development of the state.

The governor made the pledge at the swearing-in ceremony of the two newly appointed members of the State Executive Council (SEC) and three Permanent Commissioners of the State Independent Electoral Commission (BASIEC).

Bala Mohammed said that the move is to ensure optimum performance by all the political appointees in line with the policy thrust of his administration.

He then tasked all the sworn in appointees to justify the confidence reposed in them by discharging their duties diligently and to the best of their ability in accordance with the constitution.

The governor particularly charged Maryam Bagel, who was posted to the Ministry of Commerce and Industry, to come up with a new strategy of improving and advancing commercial activities in the state in order to boost the internally generated revenue (IGR).

He also called on her to come up with innovative ideas for the growth and development of commerce and Industry in the state in line with the government’s plans of reviving industries for economic development.

Turning to Dr Asma’u Giade, who was posted to the Ministry of Culture and Tourism, he enjoined her to use her expertise in the sector by harnessing all tourism potentials in the state in line with international best practice.

Bala Mohammed said that “Today is a very auspicious to us as government, the two commissioners are to replace the vacant in the cabinet and incidentally as for our promise to women folks, we are bringing gender equity into the cabinet”.

He added that “We are replacing the vacancies with tested technocrats and some of the best ladies we have in the state. Today to me is a promise fulfilled in terms of gender participation in participatory democracy.”

To the BASIEC appointees, he urged the new Permanent Commissioners in the State Independent Electoral Commission to join hands with their colleagues and to conduct themselves with a lot of integrity and fairness to ensure credible and acceptable forthcoming local governments elections.

According to him, their appointment is coming when the state government has concluded all the necessary arrangements towards the conduct of Local Governments elections.